LIVINGSTON COUNTY – Just before Monday’s snow melted, one of Letchworth State Park’s most devoted hunters was watching for deer in the dense hemlocks along a steep backwoods ridge that leads straight down to the Genesee River.

It was the second-to-last day of muzzleloader season. He had already taken a nice buck the opening day of gun season and another in October, during archery season, so he and a few others were deep in the Letchworth woods looking for does. Just as he was about to walk slowly through the woods, maybe pushing hidden deer towards a friend waiting at the edge of a nearby field, he laid eyes on something completely unexpected.

“It was pretty wild. I did not expect to see this big black bear about 40 yards away,” said the hunter, Matt Sphar, over the phone as he worked on the last of the bear meat. “In the moment I’m kind of back and forth. I don’t want to kill a bear but I have a tag and it’s a once-in-a-lifetime kind of thing. I watched it paw the ground for awhile as it seemed unaware that I was there.”

Sphar knew from talking to Park Police that it was legal this year to shoot bears in the park, but he also knew that it is bad form to kill adult females, called ‘sows,’ with cubs. He watched the bear for a bit before making his final decision.

“It really looked like it was just eating acorns,” said Sphar. “It was pawing around, and I didn’t see any cubs. I had a good view of the surrounding area. I know cubs tend to stick close, especially if bears are on their feet, so after awhile I was confident that this was no mother bear. I had a good shot so I raised the muzzleloader. The shot hit him really hard, and he slid over the steep ridge and out of sight.”

Sphar let the bear trail off so that it could safely expire, but the daylight faded and he and his fellow hunters agreed to look for it in the morning.

“The next morning, most of the snow was gone, and everything was pretty wet,” said Sphar. “I brought six other guys to help track, and we found him soon, way down the gorge by the river. We all kind of knew it was going to be a heck of a time getting down there, and a heck of a time getting him back up. He had slid a good ways down the shale, and we all had to follow the well-established deer trails to get down to him.”

Sphar says that all the slithering down the muddy deer trails was worth it when they walked up to the big animal and saw that it was a male in its prime.

“The worst thing in the world would be to find it with cubs around it,” said Sphar. “But this was a male, and we estimated it at 300 to 400 pounds. We had some string with us and measured out from hind foot to nose was about 80 inches, which is just over six feet.”

Then the real work began. Sphar, as a meat hunter, intended to pack out all of the bear’s meat with its hide, head and feet. That was going to be a challenge in this steep, muddy terrain. But, being careful not to slip on the slick deer trails, they all made it out with full packs of bear meat on their backs. Sphar carried the 60-pound intact hide, head and paws, which will eventually become a rug.

“We get a lot of deer down there by the river and know it’s crazy to try and pack them out whole,” said Sphar. “We de-boned everything, but even then each man could pretty much just carry as much meat as one front limb. But I’m a meat eater and we eat it all. We’ll also be giving a lot of this bear to the guys who helped pack him out.”

Above all, handling the bear in person only impressed upon him further the size, power and beauty of these animals.

“I have so much respect for these animals,” said Sphar. “I’ve really harvested a lot of nice deer in the backwoods of the park, in steep spots where people don’t usually go. I know bears stick to these hidden pockets if they can, which is why they are so rarely seen. And handling him up close like this, looking at the size of his forearms…they’re amazing animals. Just so incredibly powerful.”

This is the first year that the DEC is letting hunters take bears on park land. Sphar, a lifelong hunter, trapper and angler, thinks this is the third bear taken out of the park this year. An arborist by trade, he spends most of his waking hours in or around trees. He lives with his wife Becky and their two young children in North Java, NY. 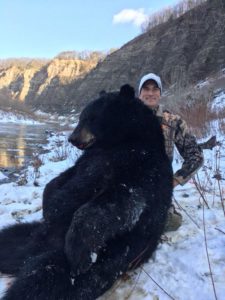