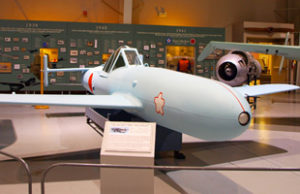 GENESEO – Life-sized models of early Japanese and German combat jets are en route to their new home at the National Warplane Museum.

According to Austin Wadsworth, President of the National Warplane Museum, the models were built by Nunda resident George Lucas. The donation of the models represent the generosity and trust of their previous caretaker, Wings of Eagles Discovery Center in Horseheads, NY.

“We are so excited to have these new additions to our collection here at the National Warplane Museum,” said Wadsworth. “We are thankful to Mike Hall, President of Wings of Eagles Discovery Center in Horseheads, for facilitating this acquisition. When Museums work together to further the work of keeping history in the forefront of our minds, it advances our abilities to educate and inform the public of its significance.”

The Japanese Navy Yokosuka MX-7, also known as an OHKA or ‘Cherry Blossom’ and the German Jet Heinkel HE-162 or ‘Volksjäger’ are both infamous jet-powered innovations that the two Axis nations used to assail Allied troops and materiel.

The OHKA has an especially bloody legacy. It was a ‘flying bomb,’ a jet-propelled, human steered kamikaze anti-shipping attack plane. Pilots would purposely crash these into enemy vessels, inflicting terrible damage and loss of life, including the life of the pilot. Americans nicknamed the little planes ‘Baka,’ Japanese for ‘idiot.’

The Volksjäger, or ‘people fighter,’ was the fastest of the first-generation military jets. It was light because it was mostly made of wood, and was part of Nazi Germany’s final plans to overpower Allied aircraft.

The models would be impossible to receive without the constant labor of museum volunteers.

Lucas and a crew of Museum volunteers traveled to Horseheads early Thursday morning to retrieve both replicas.

“Mr. Lucas will be instrumental in ensuring that the aircraft are dismantled properly, secured for transport and will oversee the re-assembly once they reach their new home in Geneseo, NY,” said Austin Wadsworth, President of the National Warplane Museum.

The models will be reassembled and displayed in the Museum’s exhibit hangar. 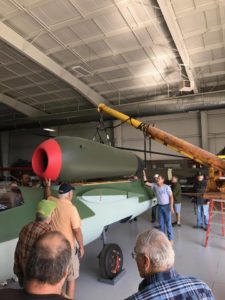 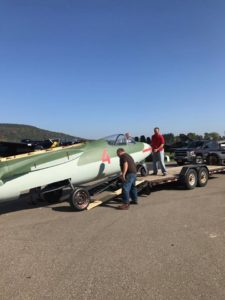 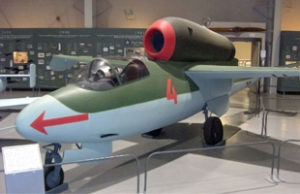