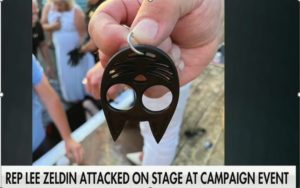 Zeldin was standing on a trailer outside the VFW post in Macedon making a speech on jail reform when Jakobonis, possibly drunk according to witnesses, wove his way through the crowd, loudly yelling “You’re done! You’re done!” even as he climbed onto the trailer bed with Zeldin and lunged at Zeldin with what turned out to be a “Ninja Kitty blade.” Zeldin grabbed his wrist, but both Zeldin and Jakobonis fell to the bed of the trailer, grappling on the ground, until bystanders including his running mate Alison Esposito and AMVETS National Director Joe Chenelly sprung into action and restrained Jakobonis, who was ziptied by other bystanders until Monroe County deputies arrested him and led him away.

There was some controversy over what it was that Jakobonis was using as a weapon. Some reported it as a knife, and others reported it as brass knuckles.  The weapon was confiscated, and found to be a black Ninja Kitty blade, about 3.25 inches in diameter, which is used as bladed brass knuckles when punching.

Investigators held the suspect for six hours before arraigning him. Jakobonis told investigators he did not know who Zeldin was, or even that he was a Congressman. Under New York State law, he could not be held, but on Wednesday, July 27, he has to face the federal charges and there is a bail hearing attached to that.

Following his arraignment, Jakobonis was released on his own recognizance because under state law he could not be held. However, he was ordered not to leave Monroe County and an order of protection was initiated. The new federal charges of attempting to assault of Congressman, which he will answer July 27, may result in jail time and/or bail.  Zeldin, who was unhurt in the attack, finished his speech when the commotion was ended.