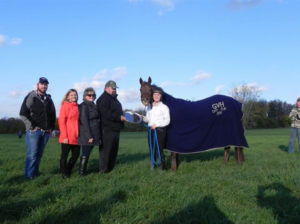 The Bailey trophy, presented in the field to Wohlschegel by Lew Bailey’s grandson Bryan Bailey, who traveled from Machias for the occasion. Bailey was a true legend and icon of the GVH. His accomplishments included hound breeding, huntsman, whipper-in and Point-to Point competitor, winning in 1938. More importantly, Bailey is fondly remembered as a mentor and true sportsman in the deepest sense of the word. Photo courtesy of Andrew Chanler)

GENESEO – Chilly wind blasted through Connie’s mane as she tore across the Haverford Farm meadow toward the flags. Having dodged and twisted her way over rough country more like a deer than a horse, the finish was in sight. Kasandra Wohlschlegel pushed her into top gear and they flew through in first place.

Hot on their heels in a close second was Genesee Valley Hunt (GVH) Joint-Master Marion Thorne, one of the most distinguished riders in the race, having won it 13 times since 1974. With a big smile and a sweaty brow, she congratulated Wohlschegel. The 131st Point to Point Steeplechase was over, and the honest victor was young blood, only 20 years old, having contested the race for her first time last year.

“This is one of the only races like this in the country,” said Wohlschegel after gratefully accepting the Cary Cup at the traditional post-race gathering at the Wadsworth Homestead. “I feel really honored to ride in it. Even finishing is a huge honor. You need to be comfortable to go that fast over such diverse terrain. I’ve been with Connie for about a year and a half and it was a bit of a rough start. It took a long time to develop our relationship. But the race made me realize why we have her.”

Indeed, the race is not for the faint of heart. Horses and riders fall. Noses and arms are broken. Sometimes horses die. There is no specified track and no one to correct the riders’ mistakes.

The point to point steeplechase hails back to an English tradition, where wealthy nobles would get drunk and bet each other whose horse was faster and who knew the land better. Naturally, the nobles would challenge each other to races on the spot. They would pick out a distant church steeple and agree to ride there over hill and dale. Whoever got there first wins.

“[GVH Joint-Master] Martha D. Wadsworth has won many a time because she knew the land better than anyone,” said Thea Killeen, who officially presented Wohlschegel with the Cary Cup for her victory. “Everyone would follow her because they knew she would take the fastest route. There was a gate coming up and she slowed and she slowed, and everyone following her slowed and slowed, thinking ‘well, if that’s what she’s doing that’s what I’m doing.’ Then she gave a yell and jumped over the fence and left the others standing there behind the fence. That just goes to show that shrewd trickery is such an important part of this race.

Geneseo’s is the longest running old-fashioned steeplechase in the United States. The races are so rare that in some horsing circles the term ‘steeplechase’ means running around a track with man-made jumps, which are just bushes uprooted and stuck on the track. Such races are especially popular in Virginia and Maryland. Those who know the Genesee Valley Hunt, needless to say, consider this race to be much more challenging.

Even more so than just the athletic challenge, though, the members of the Hunt consider events like this the ultimate crossroads of history, equestrian skill and wildlife conservation, and like nothing more than handing off the reins to younger hands.

“This makes us think about what we do with our land and animals,” said Killeen. “I want to congratulate everyone in this room for keeping a tradition alive that I think is very important.”

Wohlschegel, at least, says that she will carry the valley’s hunting and racing tradition as long as she is able, drawing inspiration from the Master, Thorne whom she narrowly beat.

“Marion is the only reason I’m involved with the Hunt,” said Wohlschegel. “I started riding for her two years ago just to exercise the horses. I rode in this race last year with a different horse, and now I’m hooked!”