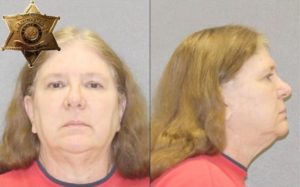 YORK – The Livingston County Sheriff’s Office arrested a local woman on a felony charge for allegedly using a neighbor’s account to pay her own bills.

According to a press release from Sheriff Thomas Dougherty, Donna Brian, 58, was arrested for felony Grand Larceny in the Third Degree.

The Sheriff’s Office investigation alleges that Brian used a neighbor’s checking account to pay her own bills online. Police believe that these acts were completed without the neighbor’s knowledge or consent.

The investigation and arrest were handled by Investigator Dan Rittenhouse of the Criminal Investigation Division and Deputy Phyllis Applin of the Sheriff’s Office Civil Division.

Brian was turned over to Central Booking Deputies at the Livingston County Jail for processing and pre-arraignment detention.

The Livingston County District Attorney’s Office recommended that bail be set at $5,000 cash or $10,000 bond.