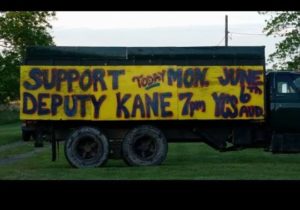 YORK – There will be an emergency meeting Monday night to discuss the School Resource Officer position for 2016-2017.

According to the York Central Schools’ website, the Board of Education has called the emergency meeting for 7 p.m. on June 6 in the auditorium to discuss the employment future of Livingston County Sheriff’s Deputy Rebecca Kane as School Resource Officer.

“The children respect and trust Deputy Kane,” says the petition. “She is many students trusted authority figure. Deputy Kane can be viewed throughout the school day interacting with the students of YCS in numerous different ways.”

A large sign on a dump truck by the old softball field on Rte. 36 says “Support Deputy Kane.”

A community online petition, accessible here, has begun and has garnered 92 signatures as of Monday afternoon.

School Resource Officers serve as first responders in schools and build positive relationships with members of the school as social and emotional support.