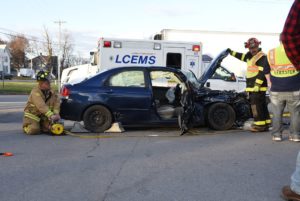 According to first responders at the scene, a sedan was northbound on Rte. 63 trying to turn left onto Rte. 36 when a southbound pickup hauling an empty flatbed trailer struck the sedan’s passenger side door at about 3:15 p.m.

“Injuries are non-life threatening,” said Livingston County Chief Deputy Matt Burgess at the scene. “Family members were present at the scene and are aware of the accident.”

Firefighters cut away the passenger side door to free the injured woman. An ambulance transported her to a hospital.

The accident pushed the sedan over a curb and grassy median before it came to rest.

Command staff for the Livingston County Sheriff’s Office’s Police Services and Criminal Investigations divisions are coordinating an active investigation into the accident.

First responders coordinated traffic while the on-scene investigation was active. Traffic remained open on 63 and 36 while first responders were at the scene.

Firefighters with the York and Leicester Fire Departments responded to the scene with multiple Livingston County EMS ambulances. 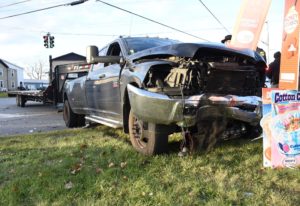 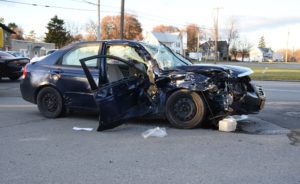 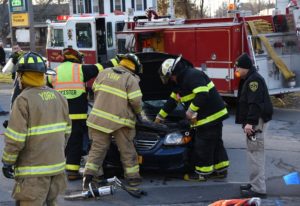