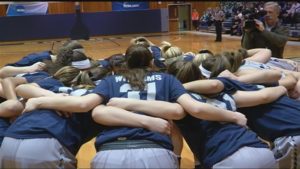 The team wears Williams’ name and number on all of their jerseys. (Photo/News10NBC)

GENESEO – As always, the Geneseo lady knights persevered with heart and grit as they hosted their first game since the sudden loss of firstyear teammate Savannah Williams, 18.

As the entire community is pained to remember, the loss of Williams in a December car accident was the second time that the team has lost one of its members in 2016. Senior guard and captain Kelsey Annese died last January in the well-publicized tragedy at 18 Wadsworth Street in the Village of Geneseo.

“There’s no script to have a plan on how to handle a situation like this,” the coach told our news partners News10NBC. “We’ve spent some time talking about that. We don’t want to run or hide from the situation that’s presented to us.”

News10NBC saw that on the bench Thursday, there was an empty seat with Savannah’s jersey and balloons sitting in her place.

Her teammates wore a shirt with her name, jersey number and her favorite phrase, ‘Hakuna matata,’ in her memory.

Just above the scoreboard is Kelsey Annese’s name and jersey number.

“They’ve demonstrated how tough they are especially moving forward together,” said Hemer, “and I’ve told people all along they’re tougher than any of us adults give them credit for.”

Together the team is able to smile despite adversity. They’re hoping to continue their winning streak, counting on each other during tough times.

“You have to play the hand that’s dealt, good or bad,” says Hemer. “Right now, it’s not the best hand, but it’s our turn to throw a card and there’s choices to be made. I’m sure, knowing their resiliency, they’ll make the right choices moving forward.”