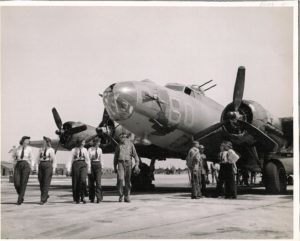 Seymour with the WASP.
(Photo courtesy of the National Warplane Museum)

GENESEO – An American hero, women’s aviation pioneer and champion of WASP will grace the grounds of this year’s airshow at the National Warplane Museum.

Dawn Rochow Balden Seymour, 100, will be at the museum on Big Tree Road for the airshow July 14 through 16. She was the first woman ever accepted into the Cornell Pilot Training Program (CPTP), is a trained combat night pilot, has flown most of the surviving B-17’s that still fly today and was the first President of the Women’s Air Service Pilots (WASP) WWII, Inc.

Born in Pittsford in 1917, she graduated in 1939 from Cornell University with a BS degree from the College of Home Economics.

1939 was the year Seymour took off. That was the year that she became the first woman accepted into CPTP and took her first plane ride in a yellow Cub. Since then, she’s ‘lived in the wind and sand, with her eyes on the stars,’ as goes the WASP motto.  She had her private pilot license by 1940.

She graduated as a WASP WWII at Avenger Field, Sweetwater, Texas in 1943. She received WASP silver wings from Jacqueline Cochran, with orders to report: 2nd Ferrying Command at Wilmington, DE for two weeks.

Unfortunately, her military career ended with the year 1944, when the WASP program was terminated and all WASP returned home as civilians.

Seymour stayed on the ground as a civilian for a time. She joined her husband at Fort Myers and taught Red Cross Classes, later transferred with her husband to Maxwell Field, Alabama. Widowed with child in January 1946, she returned to Rochester, entered the family business as a manufacturing executive, raised a son, Bill, and became a community volunteer, continuing her interest in education of young people. In June 1956 she married A. Morton Seymour, Jr. and had four more children.

Then, at the controls of her very own Cessna 180, she started flying again and got back in touch with her calling to aviation. In 1972 she attended her first WASP Reunion in Sweetwater, Texas, and met met Miss Cochran and Bruce Arnold, son, of General ‘Hap’ Arnold.

She reconnected with WASP, who by then needed medical care and veterans benefits. Her husband’s illness forced them to winter in Arizona, where she impressed the Arizona WASP with her leadership.

She led the name change of the Order of Fifinella to WASP WWII, Inc. and was elected the first President of that organization in 1982.

Decades of her efforts and those of her fellow WASP have continually gained ground. In 1979, the Veteran’s Administration recognizes the WASP military service in WWII, and just in 2016, the military agreed to bury WASP at Arlington National Cemetery.

She has a direct connection to the National Warplane Museum, where she flew their B-17 at the time, Fuddy Duddy. She will be at the airshow shaking hands, sharing stories and enjoying the rumble of the engines she knows so well. 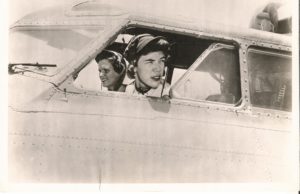 Seymour at the controls. (Photo courtesy of the National Warplane Museum)