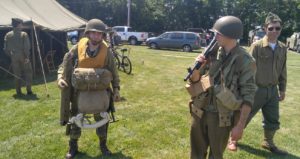 WATCH BELOW: Maj. Clark and Cpl. Heath Marchand demonstrate the paratroopers’ ‘Static Line’ jump system, which is still used by the military today. They give a similar (though more detailed) walkthrough to the civilian crews on Fly Days.

GENESEO – On an incredibly hot afternoon, one might spy a Kelly green canvas tent behind the National Warplane Museum in Geneseo. This is the temporary home for the nine men of H Company, 505th Parachute Infantry Regiment, 82nd Airborne, within sight of their beloved transport plane, Whiskey 7.

This is a group of men who are passionate about history, and pour their all into the preservation and reenactment of these historic moments in our nation’s history.

“Anybody who wants to join, who wants to learn how to participate in these reenactments, is welcome to join us here,” Scott Clark, the president of Dog Company, 16th US Infantry, 1st Division, a World War II Reenactment crew originally out of Buffalo, of whom the H company crew are a part.

This team of WWII reenactors have taken up a kind of residency with the National Warplane Museum for the flying months, providing real-to-life reenactments of the D-Day flight of which Whiskey 7 was a part. They are going to take large role at the museum’s 2016 Air Show and have placed themselves at the heart of this year’s developments at the museum.

On designated ‘Fly Days’ at the museum, the Airborne takes groups of nine up into the air in a simulation of the D-Day assault. Before they go into the air, ‘Major Clark’ runs them through a briefing that simulates very accurately the information that the young paratroopers, who averaged 18 to 23 years old, would be getting before the fateful battle. The briefing room and Living History Experience visitor flights just opened in May.

The men of the airborne division describe the briefing room as Clark’s ‘baby.’ It is a reproduction of a typical airborne briefing room, and Clark owns almost all of the charts, weapons, and displays that can be seen in the room. Soon, plexiglass coverings will make them permanent fixtures at the museum.

After the briefing, H Company loads up with period-accurate gear, almost 150 pounds’ worth, and makes their way out to Whiskey 7. Whiskey 7 is a Douglass C-47 Skytrain, a military troop transport aircraft that carried around 12 airborne infantrymen, plus a flight crew. This plane had a vital role in Operation Overlord, the overarching designation for the Normandy Invasion and liberation of Occupied France. Specifically, it flew in the second wave of Operation Neptune, the actual storming of the Normandy Beach, which was called Mission Boston. The men of the 505th Airborne, who Clark and his crew represent, were the only crew that night to hit their assigned drop target, near the town of Sainte-Mère-Église. The Airborne’s assault would prove to be crucial to the success of the Normany invasion and, ultimately, the liberation of France.

After D-Day, Whiskey 7 went on to have an illustrious career as a troop transport, flying in many other crucial missions, including Operation Market Garden later in 1944. After the war, she was passed from owner to owner until it was acquired by a private contractor who used it for their own purposes.

“It had wall-to-wall shag carpet, swivel seats,” said Clark of the condition Whiskey 7 had been acquired by the museum in, “A real 70s vibe.”

The museum acquired Whiskey 7 in 2005, and efforts were immediately put in place to restore the aircraft to its D-Day glory. The 82nd Airborne has started an IndieGoGo campaign to help finish restoring Whiskey 7. In particular, period-accurate seats will be installed, as well as revamping the navigation and radio stations. They also hope to use the funds raised to develop and expand the interior exhibit, which is currently limited to the briefing room, but there are plans to expand it into its own ‘Whiskey 7 Corner.’

The fundraising campaign, titled ‘Let’s Do a Little More for Les‘ is a collaboration between the National Warplane Museum and Leslie ‘Les’ Palmer Cruise Jr., a member of the 505th Parachute Infantry Regiment, who is believed to be the last living paratrooper who jumped from Whiskey 7 over Normandy on D-Day. Their campaign page can be found here.

You will be able to see H company during the airshow, coming up July 8 through 10 at the National Warplane Museum at 3489 Big Tree Lane, Geneseo. Airshow tickets can be purchased here. The next Fly Day is on July 2, with more occurring in late August, September, and October. For more information, you can visit the Dog Company Facebook page here. 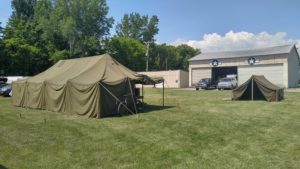 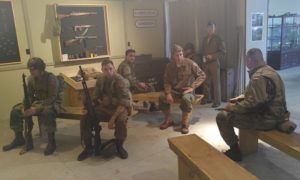