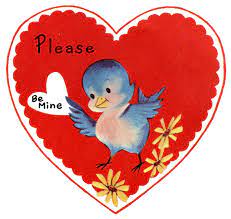 Even to this day, when Valentine’s day comes along it takes me back to some pleasant and exciting remembrances of Valentines day when I was just a little wide eyed child.

Traditionally, valentines day is known as a day of romance, a day when one would go on a romantic date, or profess their love with a great gift or in many instances, become engaged.  Well there was none of that for us, after all we were just children.

With all that aside, it was still a pretty exciting day and very much anticipated, because even at this young and tender age there were people of the opposite sex whom you “liked”.  So now this was the time in which you could, in a childlike, coy way actually see who liked who.  This was the day you could put it all out there if you had the courage to do so.

There was a lot of childlike planning involved here.  First you had to talk your mother into buying you that little packet of Valentine cards complete with the little envelopes, because you did not have the means to do so.  Next you had to make you little list of people you wanted to give a card to. It must be understood that this was not all about boys giving cards only to girls or girls giving cards only to boys, as this had nothing to do with romance.  Well almost not.  It was a friend thing so you gave cards to your friends regardless of their gender but there were exceptions to that rule, but more on that later.

The night before or day before you spent your time selecting the right card for the right person, addressing the envelope with his or her name on it and signing your name to the card.  It was all so exciting and so “grown up”.  Of course, some cards were more special than others, but I will explain that later.

Some of the kids mothers would make cookies or cup cakes to bring to school for that special occasion.  My mother was one of those who did this.  So while I was busy with my cards she was busy making delicious treats to be shared with my class mates.

Then, the big day was here.  You went to school that day, taking with you your little paper bag with your Valentine cards in it.  You had a normal school day up until sometime in mid afternoon, then it was “show time”.  By then the mothers had dropped off the treats they had made and under the ever watchful eye and the tutelage of the Sisters of St. Joseph at St. Rose parochial school the party would start.

You were required to deposit your cards into a decorated for the occasion, card board box earlier that day.  They were all mixed up and selected children would pass them out to each persons desk as you eagerly sat there.  This was done so that no one would know how may cards each person had put in, as not every one gave cards to everyone in the class, and this way no one would know who, you specifically gave a card to.

It was so exciting to sit at your disk as cards were brought to you.  The more you got the more exciting it would become.  When all of the cards were passed out you could begin to open your cards and you eagerly got to it, all the while looking for that “secret”, “special” card, the one you had hoped to fine.  When all was done and everyone had opened their cards you would all pick up your mess and put the cards into that little bag to be taken home and pondered over that night.  Then it was time for the cup cakes and cookies and milk to be served as you acted like the excited little kids you were.  Then the day was done.

Now on to those exceptions I had mentioned back when you were addressing your cards.  You see the little cards themselves were very generic in nature and wording.  Things like “would you be my valentine”?, “would you be mine”?, “I am glad we are friends”?, etc. etc. would be on them.  These were the ones you passed out to most of your class mates, BUT  if you had someone special in mind, someone whom you wanted to get a little message to then you would write a little extra message inside of her card.  A little something like “I like you, do you like me”? Or “can we be friends”, or can I hold your had during recess”?, or if you were feeling really brave and daring, perhaps something like “can I kiss you”?.  That was a big one and am not sure if I ever used it but I remember a couple of my friends doing so.  In return you were hoping to find a card with a little message in it to you, and if you did you would be on cloud nine if it was from the right person.  You would watch that certain person as they opened their cards.  You would know when they had opened yours as they would look in your directions and you could only hope that it went well because if it was not well received then you had to live with the embarrassment of it all for awhile.

Sometimes it worked out and sometimes it did not, but the whole day, the whole experience of that Valentines day was worth everything you had put into it.  It was a great day and a great time.  After all we were just little kids, living in a big world, yet we were so fortunate to be in a special place, in a special time, most importantly in a world that had yet to contaminate us.