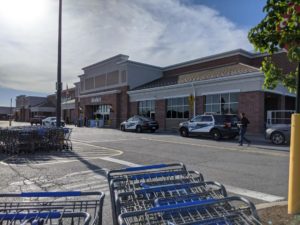 An anonymous person inside the Geneseo Walmart Store heard a girl’s voice yelling. “MARCO POLO,” which was followed by screams from a woman.  The woman was reportedly stabbed three times –  the stomach, arm and back.

Police arrived soon after and arrested one suspect.  Later a second suspect was detained outside of the store using canine assistance.

The woman was transported to a hospital by local ambulance.  As yet police have no official comment.