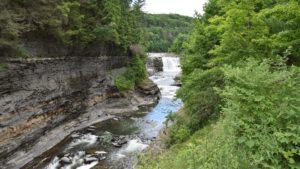 CASTILE – A woman was airlifted to an Erie County hospital Thursday afternoon after falling into the Genesee River gorge at Letchworth State Park.

According to our news partner, News10NBC, New York State Park Police say the 59-year-old fell from a stone wall into the gorge near Lower Falls.

First responders rescued her from the gorge and airlifted her to Erie County Medical Center in Buffalo.

First responders said that she was awake and alert after being pulled from the gorge.

Her identity was not released.