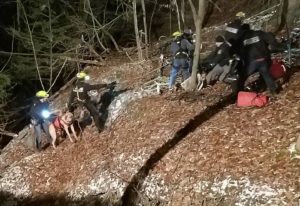 LIVINGSTON COUNTY – Two Buffalo-area residents, their mastiff and bulldog needed Sunday’s rope rescue after they tried to save their slipping dogs themselves.

According to a press release from NYS Parks Police, the investigation determined that one of the dogs slipped on an icy patch in the area of Hogsback Overlook and broke away from his leash, slipping into the ravine. The second dog also broke free following the first. The couple then followed in an attempted to help the dogs up but were unable to do so.

They all found themselves about half-way down the 400-foot Letchworth State Park gorge in an area where the gorge is extremely steep and wooded for approximately 200 feet before it transitions to a sheer vertical shale wall several hundred feet to the bottom, and the couple called 911 from a cell phone.

New York State Park Police officers trained in rope rescue along with local fire departments and State Police responded to the call on Feb. 18 at 4:48 p.m. One of the couple found his way to the top and met rescuers as they arrived, but the other person and the two dogs were still below.

While officers set up rope systems, firefighters brought in portable lighting and a State Police helicopter staged in the area. The second person was assisted to the top a short time later, but it was determined both dogs were a considerable distance down in the gorge.

A senior member of the rope rescue team was lowered into the gorge and was able to quickly bring one of the dogs to the top. It was determined that the second dog was well above average in size and a second rescuer was deployed to assist. Working through difficult circumstances including vertical rises, blown down trees, and icy conditions, the rescuers were able to reunite the ‘100 plus-pound’ mastiff with his owners and bulldog companion.

No significant injuries were reported to the people or dogs.

As always, State Park Police remind all visitors to stay on designated trails when ‘hiking our unique and scenic State Park System’ and to protect pets by following the leash law that is in effect. 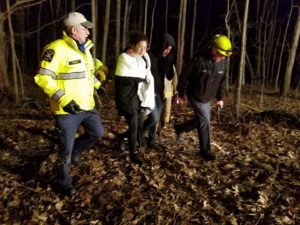