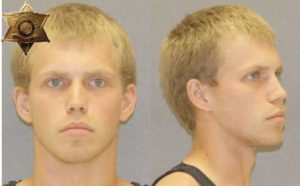 OSSIAN – The Livingston County Sheriff’s Office arrested a West Sparta man for allegedly driving under the influence of unprescribed medications, which apparently led him to a ditch on the side of Canaseraga Road in Ossian.

According to a press release from Sheriff Thomas Dougherty, Nicholas Young, 22, was arrested for misdemeanor Driving While Ability Impaired by Drugs and misdemeanor Criminal Possession of a Controlled Substance in the Seventh Degree.

On July 7 at about 5:50 p.m the Livingston County Emergency Communications Center (E-911) received a call concerning a vehicle that had been driving erratically, allegedly forcing other cars off of the roadway.

The caller then said that the suspect vehicle had crashed into a ditch before pulling into a driveway on in the Town of Ossian.

Deputy Ross Gerace responded to the scene to find Young allegedly placing pieces of the damaged vehicle into the back seat. Young allegedly said that he had been operating the vehicle and claimed he had lost control of the car due to a steering problem.

During the course of the investigation at the scene, the Deputy Sheriff did suspect that Young was operating the vehicle while in an impaired state. After submitting to Standardized Field Sobriety Testing, the Deputy took Young into custody for DWAI Drugs.

Young was found to be in possession of a quantity of prescription pills which were allegedly not prescribed to him.

Young was transported to Central Booking at the Livingston County Jail where he was processed and held in pre-arraignment detention.

Ossian Town Justice Gordon Wilson arraigned Young on July 8 and released him on his own recognizance, with no bail being set.