GENESEO – A Dansville man’s arrest for felony DWAI Drugs on Friday was at least his fourth arrest for DWAI.

According to a press release from Livingston County Sheriff Thomas Dougherty, Shawn Schledorn, 40, was arrested for felony DWAI Drugs and felony Aggravated Unlicensed Operator in the First Degree, and several traffic tickets.

On May 19, 2017, the Livingston County Emergency Communications Center (E-911) received a call reporting a motor vehicle crash on West Lake Road in the Town of Geneseo. The caller reported that a vehicle had struck several parked cars.

Deputy Shawn Whitford arrived on scene and observed that a Jeep had struck two parked cars. The deputy located and identified the driver of the vehicle as Schledorn. Schledorn was interviewed and a DWAI investigation ensued.

Following the roadside investigation, Schledorn was arrested for DWAI Drugs.

Deputy Connor Sanford, a member of the Sheriff’s STOP DWI Unit, responded to conduct a drug evaluation as a certified Drug Recognition Expert.

At the conclusion of his evaluation, it was Deputy Sanford’s opinion that Schledorn was under the influence of a CNS Stimulant and a Narcotic Analgesic.

Scheldorn was turned over to Central Booking Deputies at the Livingston County Jail for processing and pre-arraignment detention.

Geneseo Town Justice Kathleen Houston arraigned Schledorn and remanded him to the Livingston County Jail without bail due to prior felony convictions. The District Attorney’s Office recommended that Schledorn be remanded without bail. 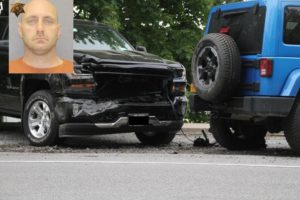