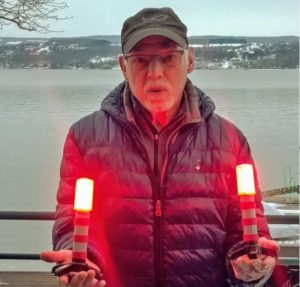 For generations, residents around the Finger Lakers have had the “Ring of Fire” on the 3rd (or 4th) of July as part of the Independence Day celebrations. The ring of fire starts after dark, as the red flares are lit by residents along the beaches of the lake, encircling it with a red ring glow.

However, as the lakes have become more populated, and lakegoers have become cognizant of the chemical damage from the ever-growing number of chemical; beach-edge flares and, in some cases, metal nails, that end up in the Finger Lakes from the annual event, a retired engineer from Canandaigua, Greg Talomie, invented a non-chemical reuseable verson for which there is no clean-up of chemical residue. He partnered with Wegmans in developing very bright red battery-operated flares that will run longer than the standard 30-minute chemical flare, with the same bright red glow, without polluting the lake with chemicals or nails.  In addition, they can be operated as red flares, strobe red (flashing) flares or as white flashlights, with metal stands, so they can also be used for traffic applications as well as bring reused for the annual Independence Day celebrations every year.

Talomie’s invention has gained wider attention than just the Finger Lakes, as lakes from as far away from Indian Lake, Ohio have ordered 8,000 of the new reuseable flares to use in their own ring of fire.

The new flares are for sale in Wegmans in Canandaigua and Geneseo. Wegman’s is donating $1 to the Honeoye Lake Association, Canandaigua Lake Association and other smaller lake associations for every reusable flare sold.  The flares come in  2 –pks and 4 pks., with the 2-pk. flares priced at $16.99.