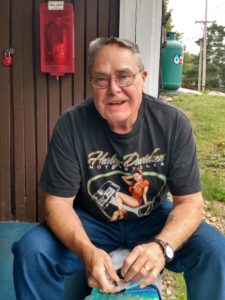 Joseph Robert Karson Pauline III, known to all as Rob, passed away peacefully on Monday morning, May 23rd, 2022, surrounded by his loving family.

Rob was born in 1956 to Joseph and Mary Pauline in Rochester, NY.  He was married to his lifelong love, Renee in 1983, recently celebrating their 39th wedding anniversary.  Rob is survived by his wife Renee Pauline, daughters Nicole (Bonnie) McKennon and Emilee Pauline, and grandson Oliver Pauline.  He is predeceased by his Father, Joseph Robert Karson Pauline Jr, Mother Mary April and Stepfather Daniel April.

Rob was an enthusiastic lover of hunting, nature, animals, getting out on the open road and riding his motorcycle, and checking out classic muscle cars, of which he had owned several in the past.  Rob greatly enjoyed spending time with his family and friends, taking day trips with his wife and enjoying the serenity of nature.  Rob truly cherished his family above all else.

Rob was employed by Kodak for 23 years where he earned several certificates in welding.  Following his work at Kodak he was employed with Corning Incorporated for 16 years and was still presently.  Rob also served on the village board in Wayland for several years.

Rob was always passionate about his life and world views, but also always able to surprise you with a clever joke bound to bring a smile to your face.  A humble man who was always willing to help others in any way he could and share in all his joys.  Sharing in his favorite artistic drawing, the crockagator, the surprising one off, inappropriate but highly humorous jokes… His unrelenting strength in any time of need, even if just to listen.  Rob had a passion for his family, in their safety, health and wellbeing.  Telling you horseshit when something truly was.  Catching him smiling as he watched the enjoyment of his loved ones, and especially in teaching his beloved grandson all there was to learn about life, his little buddy.