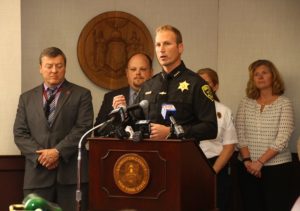 Watch our heroin discussion with Sheriff Dougherty and District Attorney McCaffrey below.

Sitting down with the GeneseeSun.com, Sheriff Thomas Dougherty and District Attorney Greg McCaffrey shared their own initiatives, professional experiences and advice to families fighting opioid addictions. Dougherty announced several initiatives at a Tuesday press conference that he and the Sheriff’s Office’s partners are undertaking to fight heroin and heroin addiction.

“It isn’t just the typical drug addicts who are using heroin,” said McCaffrey. “It is ‘the good kids’ so to speak. It is the high school athletes, the prominent kids in high school and college, the kids with sports injuries, the working father or mother who has a back injury or is hooked on hydrocodone or oxycodone or codeine, some prescription pain medicine that they no longer could have. […] It’s well-to-do people who can get addicted to this.”

McCaffrey said that his office has handled a record number of felony cases for the third year in a row, which he attributes to a rise in opiate addiction and thus crimes that help offenders acquire more drugs. His office follows a zero-tolerance policy towards dealing heroin, which spreads it to more potential addicts.

“The biggest difference that we start with is whether you are a dealer, or a user,” said McCaffrey. “We have a zero tolerance policy for selling heroin in our community. If you sell heroin, we’re going to request state prison, no ifs, ands, or buts.”

Community members have anonymously disposed of more than 900 pounds of drugs in the red medication dropbox outside of the Sheriff’s Office. The Sheriff’s Office is partnering with the Caledonia Police Department to install another dropbox in the north of the county.

Deputies are equipped and trained with Narcan, or Naloxone, an antidote for opioid overdoses. To date, they have administered Narcan 11 times, sometimes successfully, sometimes not. CASA and Livingston County EMS partnerships have delivered the kits to the LCSO at no cost.

Since January 2015, the Sheriff’s Office has filed 341 charges against people on I-390 as part of Operation Safe Interstate. Drug interdiction initiatives will continue on 390 and on Rte. 15A.

Vivitrol, a injectable dose of Naltrexone, is administered to inmates being released from custody at the Livingston County Jail. It blocks opiates for about one month and helps inmates break drug addictions and begin long-term recovery.

A pilot Heroin Education, Resisting Opiates (HERO) program brought the difficult imagery and pain of opioid abuse to 11th and 12th graders in Dansville. The program includes an EMS mock call where the symptoms and treatment of an overdose victim take place, a speech from a currently incarcerated inmate whose choice of using heroin or opiates landed them in jail, presentations from family victims who have lost loved ones from heroin deaths, recovering addict interviews, education resources such as warning signs and who to turn to and ends with a powerful presentation of an actual overdose of a subject from Livingston County including his life story and real scene photos. The program will be continued in other Livingston County Schools. 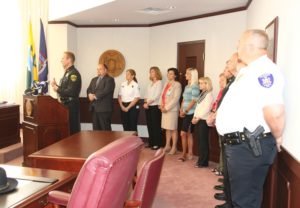