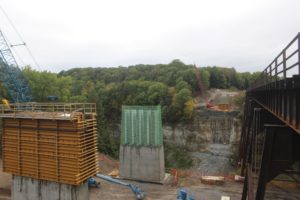 Watch the video below!

CASTILE – The Portageville bridge project is as unstoppable as a freight train.

Check out the progress on this amazing time-lapse video shot by the construction crew via Work Zone Cam.

The $70 million bridge project is expected to chug along for the next approximately two years.

Many lifelong visitors of the park are chiming in on social media to say their goodbyes to the old bridge, an architectural icon of the Genesee Valley.

“Goodbye old friend,” posted Melissa Rindfleisch Stanley to Facebook. “You will be missed but often remembered.”