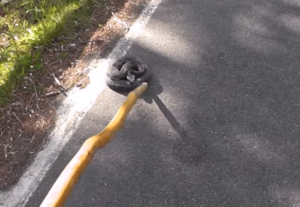 (Screenshot from video by Ken Wallace)

Watch Wallace’s video of his encounter below!

CASTILE – A frequent visitor to Letchworth State Park spotted a black-phase rattlesnake warming itself in the road Monday morning, and decided to give it a nudge in the right direction.

Warm weather has called forth Letchworth State Park’s rattlesnakes from their winter lairs, and some visitors to the park will encounter them. At about 8:30 Monday morning, park regular Ken Wallace had just such an encounter.

“As I was driving down the road I saw what at first appeared to be a stick, but as I got closer I realized that I was getting a rare sighting of an eastern timber rattlesnake,” said Wallace.

According to the New York State Department of Environmental Conservation (DEC), the timber rattler is the largest venomous snake indigenous to New York. Stocky and powerful, adults usually range from three to four and a half feet in length, with a state record of just over six feet.

Timber rattlers are active through the summer and into mid October, when they find a quiet spot to hibernate for the winter. Upon emerging from the den in April, sometimes May, they are very lethargic. Little feeding occurs early in the spring.

Although still fairly common in some local areas, timber rattlesnakes have been extirpated or greatly reduced in numbers in most areas where it was once numerous due to unregulated collection and indiscriminate killing. A contributing factor was the bounty system under which a reward was paid for each timber rattler killed. Such bounties were outlawed in New York State in 1971.

“These creatures need your respect, but are quite non-aggressive if left alone,” said Wallace. “This one was in the highway so I made sure to get it off the road and out of harm’s way. Never once did he offer to strike out in my direction but he gave me plenty of warnings not to get too close. I admire these creatures but also greatly respect them.”