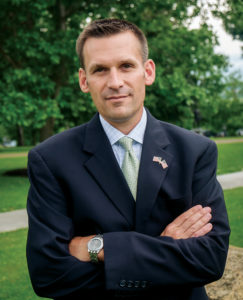 Watch the recording of our live video broadcast from the Livingston County Board of Elections below!

McCaffrey won the election on the Democrat and Conservative lines over Republican candidate Ray Sciarrino with 15,937 to 10,747 votes.

“The Livingston County Conservative Party congratulates District Attorney Greg McCaffrey and all of our candidates on their significant wins this cycle,” said Conservative Party Chair Jason McGuire. “Our party strives to identify the most qualified and credible conservatives for public office, regardless of party affiliation. It is our committee’s belief that if we consistently recruit and run the best candidates, that the voters of this county will take notice and the party building will take care of itself. That political philosophy is bearing itself out in Livingston County politics. I believe the county is the better for it.”

“I baptized Greg when he was a baby. We held him in our arms,” said Joe Bucci Sr., owner of American Rock Salt. “We knew from day one that he would be a very successful young man. This shows that he’s far more qualified than anyone else to serve as the DA.”