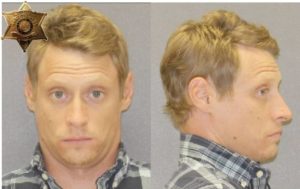 LIVONIA – The Livingston County Sheriff’s Office arrested a Hemlock man for allegedly driving backwards along Clay Street and found that he is wanted in Monroe County for alleged traffic offenses.

On July 29 at approximately 11:03 p.m., Deputy Richard Gage of the Livingston County Sheriff’s currently assigned to the Sheriff’s STOP DWI Unit allegedly observed a motorist driving backwards on Clay Street in Hemlock. The Deputy stopped the car and identified the driver as Skinner.

Skinner allegedly told police that he was driving backwards on the highway because he was having issues with his clutch.

A driver’s license check allegedly found that Skinner’s privilege to operate a motor vehicle in New York State had been suspended/revoked a total of 14 times. Skinner is also found wanted in Monroe County for alleged violations of vehicle and traffic law.

Skinner was transported to Central Booking at the Livingston County Jail for processing and pre-arraignment detention.

On July 30, Livonia Town Justice David Mahoney arraigned Skinner and released him on his own recognizance. Livingston County Assistant District Attorney Joshua Tonra recommended that Skinner be held in jail on $1,500 cash bail or $3,000 secured bond.

“Due to the fact that I am always questioned on the topic of bail in cases such as these, I want to be perfectly clear to the people I serve, this subject being released is not a reflection on our Office or the District Attorney’s Office,” said Dougherty in the press release. “These Deputies are doing a remarkable job of making our county a safer place by removing these repeat offenders from our roadways. In my opinion, the District Attorney’s Office gave a fair recommendation with cash bail to ensure his return to a later court date. However, it is the Town Justices’ sole decision to set bail or not set bail.”