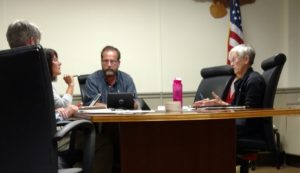 Geneseo’s Republican caucus designated LaVigne and former Town Code Enforcement Officer Ron Maxwell for two seats on the Geneseo Town Board. Irwin was also nominated at that caucus but not designated as a Republcian candidate. She gave a statement in August that she will not run for re-election and will not ‘fall in line’ and endorse the Republican candidates.

“We’ve been getting some troubling calls over the last couple of weeks from constituents saying that someone is campaigning at their doorstep telling them that I’m incompetent, that’s an opinion, that’s free for anyone to have, that I’m incapable of budgeting or managing our finances, which I think is interesting, but also that our staff is unhappy, and Patti you’re being attributed to these comments,” said Wadsworth as a last order of business for the meeting. “I was curious if you have something that you want to share with the board as far as facts or details that you know of staff being unhappy or things not being done or happening. I think we have a duty to address those sorts of things if they come up.”

“I was concerned because if there is a staffing issue, we need to know about it,” followed Irwin. “If people are unhappy who are working for the municipality and that is being communicated to taxpayers, then it’s our obligation to know who’s unhappy or what is causing the unhappiness and we need to address it, or if there’s a line in the budget that’s not working, or it’s not being used correctly, then we need to know that so we can correct it. So I’d like to know what facts we have to prove that those things are happening in the Town so we can address them as a Board.”

“I’m a little bit taken aback that this is first of all occurring in this forum,” said LaVigne after a pause. “I’ve told people that I’ve had concerns about turnover of staff over probably my whole entire term, which is four years. I continue to have concerns that we are putting some employees in situations that don’t always allow them to succeed. I feel it’s my opinion to do that. I have not commented on you personally, I’ve not commented on any of the budgeting stuff here other than that I think there’s a way to do it better.”

“I really wish that in the future if you have constituents telling you this that you allow me to answer those in maybe a little bit less public forum,” continued LaVigne. “I think that would be appropriate. If you would allow me to have a discussion with that person so I can clarify those issues.”

Irwin continued, saying that ‘These are public issues, and by you going out,” but LaVigne said ‘I am not going to continue participating in this discussion at this time.’

“I can tell you communications here have been very awkward since probably April for a variety of reasons,” continued LaVigne, “but I don’t think that that is something that needs to be aired in this sort of forum.”

All candidates who will be running for Irwin and LaVigne’s seats were present at the meeting: Wesley Ebersole, Leah Fletcher, and Ron Maxwell, as well as the candidates running for Wrubel’s open seat: Tony Macula and Andrea Bailey. 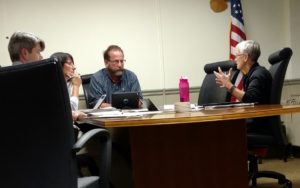