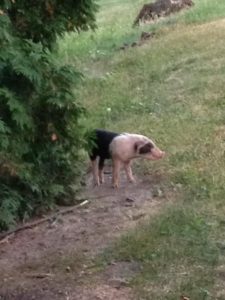 GENESEO – Several Village of Geneseo officials found themselves working together after hours Wednesday night to safely capture a piglet that was running in the road on Rte. 20A (Lakeville Road) by the bus garage.

Aprile Mack, Secretary to the Village Planning Board and Deputy Clerk/Treasurer for the Village Board of Trustees, was the first to spot the little porker, running in the road as cars zoomed by at 30 mph. Once she realized what it was, she knew just who to call.

“I was on Groveland Road going towards Country Lane when I saw this animal in the road, and it looked like a dog. The more I looked at it though, I realized it was a pig, a little baby pig,” said Mack. “I called Teresa [Easton]. She grooms dogs and has three donkeys. So I, my son, Teresa, her husband, and two of our newest Village Police Officers, Ben Swanson and Michael Donals, corralled the pig, and Officer Swanson grabbed it.”

Easton, the Village parking enforcement officer, brought a crate to keep the pig. The group gave it water and immediately started making calls to local farmers.

“Officer Swanson called in to dispatch to contact farms in the area,” said Mack. “We called Ron Maxwell, [Village code enforcement officer], who has a farm nearby. We called Jason Frazier [Village water superintendent] to try and get in touch with Pete Kingston [Village of Geneseo maintenance employee], to see if they keep pigs on their farm.”

For now, Easton has arranged a comfortable temporary home at a friend’s residence in York. Anyone who believes they may know who this pig’s owner is is encouraged to call Geneseo Police at (585) 243-2420 ext.4. 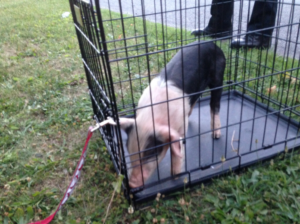