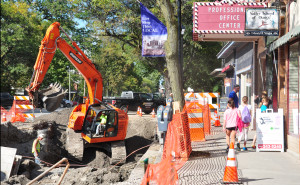 GENESEO – The Village of Geneseo is making cutbacks to make the first payment towards the 2015’s $1.5 million Main Street water and sewer overhaul.

Mayor Richard Hatheway said that the Village will have to increase the Village’s tax cap by 2%, cut his and the Trustees’ salaries and put off purchasing municipal equipment to balance the budget and pay the first Main Street Project installment of $94,000.

“We have balanced the budget, but it hasn’t been an easy chore,” said Hatheway. “We have returned my and the Trustees’ salaries to levels of 2008, which is a pittance but it does indicate the seriousness of this. […] We have cut $1,000 from our Main Street holiday decorating budget and had the help of our department heads to minimize our expenditures.”

The Board said that municipal department heads consented to keeping their budgets consistent with those of 2015 by receiving no additional funding or equipment. The Village put off providing Police Chief Eric Osganian with a new patrol car and salary for hiring a new officer. Fire Chief Andrew Chanler, Water/Wastewater Superintendent Steve McTarnaghan and Street Superintendent Jason Frasier also will not receive additional funding or equipment in the coming fiscal year.

The Village also removed $20,000 set aside for the restoration project for the Geneseo Building, the center of Village Government at 119 Main Street, to help pay for the Main Street project.

“That is something that really hurts me,” said Hatheway. “There is still $290,000 in reserve for this building, but that’s one thing that I’m really sad about.”

Some increased costs over the past fiscal year have eaten into the Village’s available funds. Hatheway said that increased overtime for police officers during the death investigation on January 17 and 18 were a significant expense, and there could be significant expenditures on the horizon if the New York State Department of Environmental Conservation (DEC) requires the Village to eliminate more phosphorus from its wastewater as it has in Avon.

However, there have also been several revenue sources that increased over the past year, including fees and fines for on-street parking tickets and Village court. Hatheway said that ticketing and court activity is expected to plateau or decrease over the summer.

Though there is a plan, the Village is not out of the woods yet. They still need to hold a public hearing before moving forward on the tax cap increase, which would increase the amount of incoming tax revenue that the Village can spend by 2% for the coming fiscal year. Hatheway predicted that this would add an anticipated $50,000 of tax revenue, which would help pay off the Main Street project. That public hearing is scheduled for April 4, 2016 at the Village building at 199 Main Street at 5:15 p.m.

“It has not necessarily been a really happy budget time,” said Hatheway.

The Main Street project is still awaiting its finishing touches. Frasier said that the street will be graded and blacktopped by Village workers over a two day period in June.