CASTILE – A photo of special operations police personnel at the Letchworth Arts and Crafts Festival is turning heads but fortunately is no indication of a specific public threat.

Facebook profile Jeff Kramarz posted the image to social media with the text, ‘Snipers on a roof at the Letchworth Arts & Craft Festival. Welcome to the new normal in America.’

A State Police Sergeant who asked not to be named confirmed a heavy presence of SORT (Special Operations Response Team) personnel with New York State Police and New York State Park Police. The BearCat armored vehicle that serves the NYSP’s western region is staged at the festival. There is no specific public threat, but SORT units are increased due to ‘everything that’s happening in the world’ and ‘particularly the Las Vegas shooting.’

“I can confirm that the people in the photo are not my SWAT members,” said Dougherty. “The Sheriff’s Office is only providing traffic control at the park entrance as a billable detail, meaning that the festival reimburses us for the cost.”

The public seemed interested in who the special operations personnel in the photo were and why they were there.

“did any of you call this in to your local authorities?” posted Brian Innes. “did you take for granted that they belonged there? how did you know they weren’t there to do bad things. you walked around and looked but said nothing. what happened to ‘if you see something, say something?'”

“They were on top of a pavilion being used as a police Barracks building with state police standing below them. Figured they had it covered,” posted Kramarz. “You make a good point though Brian. There was a brief moment where i wonder who they were and if this was the police or if we were in trouble.”

“Having a hard time believing this for several reasons…posting pic of them, way to give it away,” posted Annie Irwin Fuller. “Maybe they are the bad guys! They don’t look very official or incognito. I don’t know…..not prepared to spend my life being afraid. Not willing to accept this as “Welcome to the new America” either. 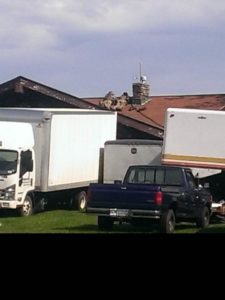