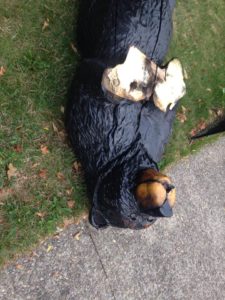 MOUNT MORRIS – The Village is furious that Mount Morris’ most famous bear was the victim of an apparent act of vandalism Thursday night.

Vandals appear to have unscrewed the bear’s ‘Welcome Home’ sign and knocked over the carving. The sign was recovered lying next to the bear.

“The sign was an add-on, so it was attached by glue and six or seven-inch bolts,” said the bear’s rightful owner, Kathy Link, who runs Carvings & More on Main Street. “They had to work a little bit to get the sign off. My guess is that they were pulling on the sign and tipped the bear, then unscrewed it and took off. I have the sign, and my son will re-attach it, good as new.”

Link knows that people love the bear. Strangers stop to take selfies with it. Mount Morris Central School kids are currently voting on the best name for the bear: Francis, for Francis Bellamy, who wrote the Pledge of Allegiance and was born in Mount Morris; Jemison, for Mary Jemison, the legendary ‘white woman of the Genesee;’ Seymour, for Mary Seymour, prominent women’s suffrage activist who was born in Mount Morris; or Morris, for Robert Morris, financier of the American Revolution and the town’s namesake.

Still, Link is surprised by the continuing outpouring of support Friday morning.

“A man just came into the shop and offered to pay for repairs,” said Link. “I didn’t know people were offering reward money to track down who did it. We’ll figure it out, my son will do repairs probably tomorrow and we’ll point my shop’s camera at the bear.”

Town Councilman David Provo, on whose property the bear sits, facing Carvings & More, is glad to see that the incident seems to be drawing the community together.

“I hope that this brings the community together to show how much we care,” said Provo. “The bear represents the reason that I’ve lived all my life in Mount Morris, raised my kids here. I want Mount Morris to be a place where my kids want to stay. And Kathy, I mean, you can’t find a nicer person. You’re talking about the person who walks up and down Main Street every morning watering the flowers.”

Link, a Dansville resident, said that watering the flowers is just her way of giving back a little.

“That’s just something I do,” said Link. “You need to give back in life. Plus, I need the exercise. And it makes the town look nicer, you know?”

“We’ll get to the bottom of it,” said Link. “Neighbors have told me that it’s been a bad year for bears around here. First Geneseo’s bear gets run over, now this!” 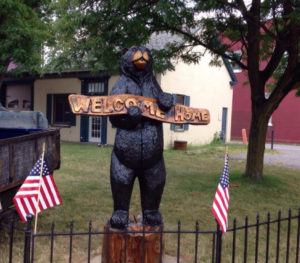 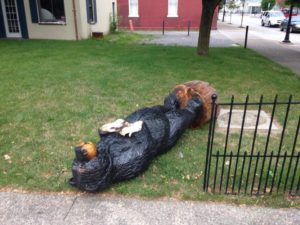 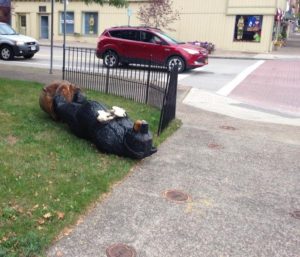