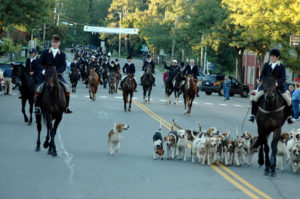 Opening Meet starts at 7:30 a.m. on Main Street in Geneseo.

Apparently there are rumors going around that The Race or The Hunt has been cancelled due to the heat and hard ground from lack of rain. I always have to smile a bit at this time of year when I am asked when The Hunt is. By this, people usually are referring to one of two events.

The first is the Genesee Valley Hunt (GVH) Opening Meet on the last Saturday in September at about 7:30 a.m. when staff, hounds, and hunt subscribers process northward up Geneseo’s Main Street from the Wadsworth Homestead to the Hartford House driveway at the north end and onward into the countryside for the first formal hunt of the season.

Actually, informal hunting starts in July with meets four times a week as horses and riders are being conditioned, young hounds are being trained, and young foxes venture off, or rather are kicked out of their dens, to find their own territory. Attire is casual, things start quite early before the heat of the day diminishes scent, and the outings are generally of shorter duration. Opening Meet marks the beginning of the formal season with participants dressed in formal attire, meets cut back to three times per week at increasingly later times as the days grow shorter, and usually go on longer.  Depending on the weather, the season may go on until the legal end of hunting with hounds, which is April 15, although formal hunting ends the weekend after Thanksgiving.

The GVH is the oldest foxhunt in the country still hunting its original territory. It is important to know that the object of foxhunting is not, repeat NOT to kill foxes. No traps or guns are used, only foxhounds to do their best to track their quarry and solve an intricate puzzle based on the vagaries of scent and a wily object of interest. With the expansion of the coyote population, who compete with foxes for prey, more and more outings find themselves chasing coyotes, which use their speed, endurance, and familiarity with are larger territory, rather than guile, to elude their pursuers. The object is to observe the hounds trying to figure things out, be able to deal with whatever unexpected challenges of horsemanship, and enjoy an outing in nature in fields and woodlands off the beaten track.

The other possibility is that people are referring to the GVH Race Meet on the second Saturday in October, Horses, Hounds and Hoopla! You will see posters, fliers, ads in various local media and such. This is a major, all-day event, in contrast to the brief, low-key ride up Main Street. There are a dozen races for ponies, stock horses, novices to professionals, as well as races for Jack Russell terriers and wiener dogs, pony and wagon rides, tailgate competitions, vendors, demonstrations, exhibits, and more!  The 1.5-mile undulating turf track has been aerated whenever possible to make it more giving, so pray for a bit more rain before race day on Oct. 8.

In either case, I hope to see you there. For more information on The Hunt, go here. 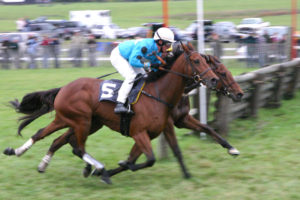 At stirring Day at the Races has something for everyone.