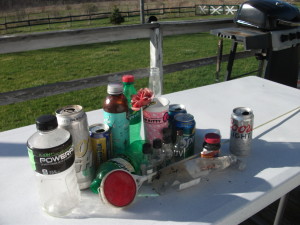 Some of this spring’s collection. (Photo courtesy of Sally Fox)

I have a long-established tradition instilled in me by my horse mother in the early 60s of going along the roadside in the early spring, before things start to grow, to collect any trash or litter that might be hazardous to horses when they become obscured by weeds or grasses.
This means not only on the shoulder of the road, but farther in where they might be tossed or jettisoned from a passing vehicle, truck, or whatever.
Over the years, I have witnessed a number of cultural trends, such as the first year when New York instated its can and bottle deposit fee, resulting in a 90% decrease in that form of litter. Still, I have never gone without making a few cents for my effort.
Then there was the smokeless tobacco phase, first in the form of tins, then as it grew and evolved to plastic containers with a variety of tasty flavors, and now has been decreasing to negligible evidence. Perhaps the guys (Is that sexist; am I assuming too much here?) figured out that it had an impact on their appeal factor.
I must say I have definitely seen a decline in the amount of trash I have picked up in recent years, although I still have no trouble filling my wheelbarrow to overflowing, while separating recyclables, interesting objects, icky things, and general detritus.
For this year, my admittedly unscientific findings left me wondering if McDonalds has a lock on the slob market, or if Dunkin’ Donuts, Burger King and Wendy’s are on the verge of going out of business.
Those who are still smoking find that the steep price of indulging this habit has driven them to the Seneca brand, with regulars outpacing menthol 2:1.
In the brewski department, LaBatt is the clear winner once again; however it is quite interesting to me to see the growth of the non-beer flavored drinks such as Twisted Tea, Angry Orchard and such. The latest trend in alcoholic beverages that I find is the tiny little plastic bottles of flavored vodka and schnapps, as well as other kinds. Do they drink them straight, add them to their coffee or power drinks, or what?
Although those items are dangerous in one regard, the point of the exercise is removing items of danger to horses, in which category I found two shattered beer bottles well away from the road. The challenge then is to find all the pieces, which isn’t always easy.
Whatever the results, I have always found the annual outing to be a time of exploration, meditation, and anticipation of things to come as spring unfolds into a new season of promise and growth. May it be so for you as well.

Coming Up
The first annual Genesee Valley Riding and Driving Club Run (or Walk) with the Horses 5K is coming up on Tuesday, May 3 starting at 5:30 p.m. The course is entirely on private land over trails through some of the local countryside that is protected by the Genesee Valley Conservancy. For more information go here.