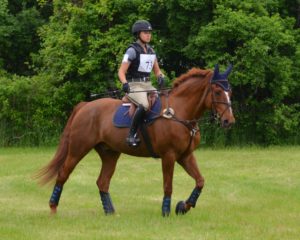 Amanda Ko looks forward to returning in August with Rafferty to compete in the Region 1 Championships. (Photo/Susan Ko)

The Valley has become a remarkable bastion for Eventing, an Olympic discipline that is the triathlon of equestrian sport known as the complete test of horse and rider.

Entries compete in dressage (school figures), stadium jumping (a winding course over fences that can be knocked down), and cross-country over solid fences, banks, ditches, and water. The jumping tests also have time/speed requirements to avoid penalty points. The combined score for all three phases determine the winners. Just one ribbon for a whole day is a lot different from horse shows where riders collect a car load of ribbons to hang on the wall.

With the acclaimed Stuart Horse Trials in Victor ending after a remarkable run of 26 years, the only remaining recognized events in New York outside the Hudson Valley are the Genesee Valley Riding and Driving Club events in June and August, and the Genesee Valley Hunt’s in mid-July.

The path to this international sport starts with modest challenges that are designed to make the riders think while building the horses’ confidence, balance, and responsiveness. Over 100 competitors from throughout the state competed in eight well-filled divisions at four levels ranging from Introductory to Training/Novice where the dressage and stadium jumping tests are at Training level, with a Novice level cross-country to get a bit more mileage and build confidence for moving up to the full Training level. Mercifully, the forecast thunderstorms did not materialize and the few passing showers did not dampen spirits.

The person who traveled the greatest distance to take part was Amanda Ko from Westchester County, north of The Big Apple, who captured first place in the top division with her 14-year-old, 16.3 hand, thoroughbred gelding Event Horizon (stable name Rafferty – Raff for short) that she has had for a couple years. This was their first trip to the Valley, along with her mother Susan, a 1984 Pony Club Graduate A. Susan evented as a pony clubber, so she can full appreciate her daughter’s love of the sport although she now focusses mainly on dressage.

She aptly summed up what true sportsmanship and horsemanship entail by stating, “There is so much care, planning, and just hard work involved in preparing yourself and an animal for competition. The hours are long and you can’t just sit down when you’re tired, because there is a horse depending on you. It’s character building to get up at 4 a.m. to braid, pack, and truck to a competition and, after competing all day in whatever Mother Nature throws at you for weather, drive home and spend the next hours poulticing equine legs, cleaning equipment, and completing all the myriad chores that were left undone at the stable while you were off on an adventure. Oh, and then remember to be gracious when you lose, but even more gracious and humble when you win… I wish more kids could have these experiences.”