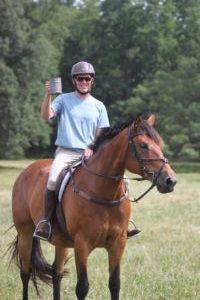 GENESEO –This year’s July 4th Cavalry Games celebrated the 40th anniversary of their renewal in 1976 when Judge J. Robert Houston, an avid historian, horseman, and member of the Genesee Valley Hunt (GVH), thought it would be sporting to revive this unique aspect of local history as part of the local bicentennial celebrations.

The cavalry games were first held on the east lawn of the Wadsworth Homestead at the south end of Geneseo’s Main Street from 1885 through1917, then from 1922 until 1932 at the Geneseo Armory with as many as 3,000 people in attendance. Teddy Roosevelt was on hand as a competitor on at least two occasions.

A total of 13 riders took part this year: 10 men and three women, among them several previous winners, including Martha C. Wadsworth, the great-granddaughter of the games’ founder W. Austin Wadsworth. There was also an international flavor with Fabian Osses from Chile, as in the country, not the Rochester suburb. The most distant U.S. state represented was Paige Haas from Eagle, Idaho.

The various challenges that comprise the event were widely used on ceremonial occasions in the military for cavalry officers to display their prowess at the skills required in battle when sabres, javelins and lances were the weapons of the day. In fact, the saber the contestants wield is an antique dating back to the original games.

Of those games still contested, most would be deemed politically incorrect in the present day as they are variations of chopping heads off or spearing Turks, Saracens, heathens, or what have you. These include spearing a suspended ring, slashing a lemon impaled on a stake, bashing soda cans off a jump standard while going over the fence, launching a lance at a target, all at the gallop with speed as a factor in points awarded; not your everyday challenges, I’m sure you agree.

Although never an actual cavalry officers’ game or training method, the most popular and entertaining part of the event is the musical chairs contest where chivalry and good manners are not in evidence for those hoping to win.

The final contest for the day is the rescue race around the perimeter of the East Lawn which is actually a large pasture rather than a lawn.  The course, marked by cones, is done twice, with riders stopping after the first round to retrieve a “fallen comrade” from the battlefield.

This year’s overall winner was Turner Boone on his wife Sally’s Reggie, earning the Douglas J. Welch Memorial Trophy in honor of a well-loved community member who died in the 1976 reinstatement of the games, suffering a heart attack after a javelin toss. Just one point behind were Jim Banker on Little Joe, with Richard Sisson and Sarah Batzing’s Stoti finishing a close third.

There is no doubt we take our fun very seriously here in the Valley, and it comes in many unique flavors.

Coming Up are the July 16 and 17 Genesee Valley Hunt and nationally recognized horse trials. For more information, go here. 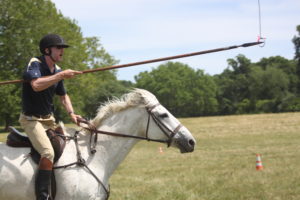