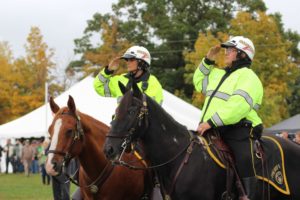 The Genesee Valley Hunt (GVH) Race Meet enjoyed what those in the know considered nearly ideal weather – a gray day of temps in the low 60’s with a passing morning shower. Ideal weather, that is, for horses galloping over a 1 1/2 mile undulating turf course, canines competing in various flavors of competitions or accompanying their owners threading through crowds of strangers in lieu of being left home for the day, and delicious tailgate offerings that do better not being baked in a scorching sun.

The Race Meet program touted the day as featuring the 88th running of the National Steeplechase Association (NSA)-sanctioned Genesee Valley Hunt Cup, this year once again offering a $25,000 purse. However, the race itself was first contested in 1893.  Therefore, this year was the 123rd running. It’s just that the NSA was founded 88 years ago.

The GVH Race Meet is the only one of its kind in New York State, with top-notch owners, trainers, horses and jockeys coming from the Pennsylvania, Maryland, and Virginia hotbeds of the sport to get some mileage, bring on newcomer horses and jockeys, and boost their winnings.

One interesting snippet from the day, in my considered opinion, was Sarah Batzing’s Start of the Irish (Stoti) who won the hotly-contested, 1 3/4 mile Pace Chase ridden by Wendy Sisson. Designed to teach horses and riders how to pace themselves over a distance rather than madly gallop at break-neck speed until they run out of gas, contenders must stay behind a pace horse until after the last fence, whereupon they are released for the race to the finish.

This was 15-year-old, Irish Draught gelding Stoti’s first race, although it is his tenth season hunting. Stoti was bred by GVH staff member Ann Morss out of race sponsor Gail McGuire’s homebred thoroughbred mare Favorable Star, by an out-of-state Irish Draught stallion. The rest of the story is that he was hunted the evening before for 3 1/2 hours, rather than pampered and rested, proving that solid conditioning and regular work make for a horse that can go the distance and stand the test of time.

Further detailed information on the races will follow in future postings. 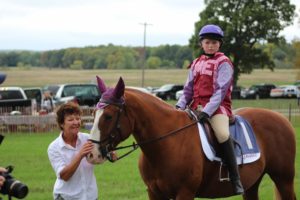 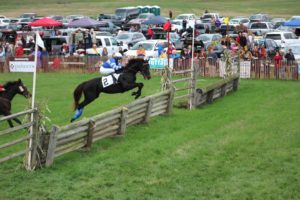 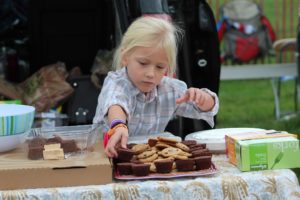 Laying out treats for the tailgate. (Photo/Karen Kandra Wenzel) 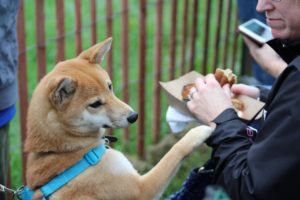 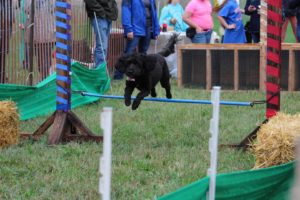 It’s not all horses. Fun for dogs, too. (Photo/Karen Kandra Wenzel) 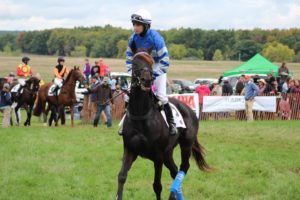 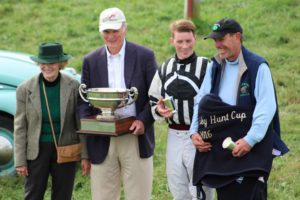 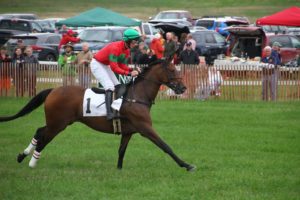 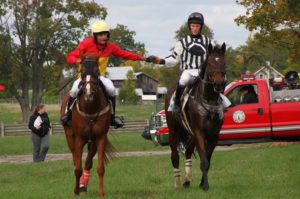 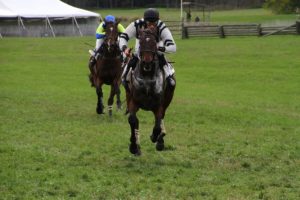 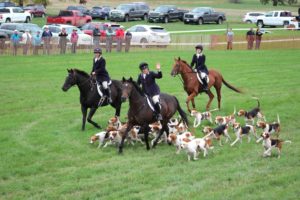 Hounds take the field with members of the Hunt. (Photo/Karen Kandra Wenzel)