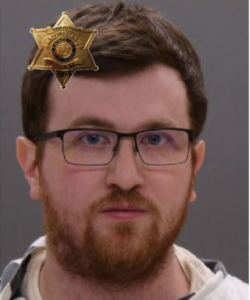 On June 9, 2022 at about 3:20pm, the Livingston County Emergency Communications Center (E-911) received a 911 call from a residence on Iroquois Road in the Village of Caledonia reporting that a two-month old child at the location was not breathing. Officers from the Caledonia Police Department, as well as Emergency Medical personnel from CHS ambulance, arrived and located the child inside the residence in grave condition. The child was rushed to Strong Memorial Hospital for treatment.

At the request of the Caledonia Police Department, members of the Sheriff’s Office Criminal Investigations Division and the Forensic Identification Unit responded to the scene to assist with an investigation into what caused the child to stop breathing.  The sole caregiver at the home during the incident, 26 year-old Zachary A. McCaa, was spoken to by Sheriff’s Investigators in an attempt to learn what occurred to the child. At the same time, members responded to Strong Memorial Hospital and were able to gather additional information and evidence.

It is alleged through the investigation that McCaa caused serious physical injury to the child after throwing him, causing him to strike his head. It is further alleged that during the incident McCaa shook the child violently on more than one occasion.  Sheriff’s Investigators continued to speak with McCaa and in the early morning hours of June 10, 2022 he was arrested and charged by the Caledonia Police Department with felony Reckless Assault of a Child. A person is guilty of Reckless Assault of a Child when, being 18 years of age or more, such person recklessly causes serious physical injury to the brain of a child less than 5 years old by shaking the child, or by slamming or
throwing the child so as to impact the child’s head on a hard surface or object.  The child remains at Strong Hospital in guarded condition.

The investigation remains active and is continuing.