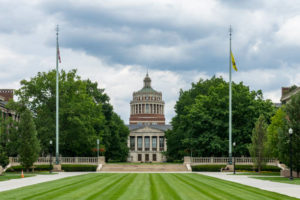 Kathy Rideout, EdD, PPCNP-BC, FNAP, who sparked a period of growth and renewed prominence at the University of Rochester School of Nursing in more than a decade as dean, will step down as the school’s top leader effective June 30.

A member of the UR School of Nursing faculty for more than 35 years, Rideout was officially installed as the school’s fifth dean in 2012 after serving in an interim capacity the previous year. She was named a vice president at the University of Rochester Medical Center (URMC) in 2013 and was appointed to a second five-year term as dean in 2017. She will return to her role on the faculty as a professor of clinical nursing and pediatrics at the conclusion of the academic year.

A committee led by Eli Eliav, DMD, PhD, director of the Eastman Institute for Oral Health, will soon launch a national search for a new dean.

“Kathy’s leadership will be sorely missed by faculty, staff and students across the University,” said UR President Sarah Mangelsdorf. “She’s been unflinching in her commitment to diversity and inclusion, has recruited record numbers of nursing students, and has forged invaluable partnerships with the University of Rochester Medical Center. The school, the University, and greater Rochester are all better for her service.”

“Kathy Rideout took charge when our nursing school needed fresh leadership, and fostered an educational environment that produces graduates ready to elevate the role of nursing and improve the delivery of patient care,” said Mark B. Taubman, MD, CEO of URMC and Dean of the School of Medicine and Dentistry. “Among her many accomplishments, she can take exceptional pride in the growth and success of the Center for Employee Wellness under her leadership. As deans we strengthened collaboration between the Medical Center’s nursing education and physician training programs in a way that enhanced both schools and today serves as a national model. I deeply value Kathy’s professional partnership as well as her personal friendship.”

“I’m extremely honored and blessed to have been able to serve as dean of the greatest nursing school in the world,” Rideout said. “It was a very tough decision not to return for another five years.”