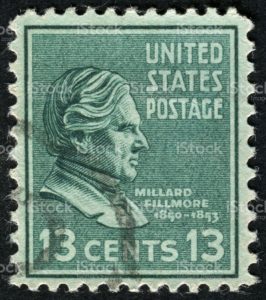 The University of Buffalo announced that three historical figures of U.S. history are being removed from their campus.

President Satish K. Tripathi said during Monday’s UB Council meeting. “Clearly, historical naming on our campus — whether academic buildings, residential halls, interior spaces or thoroughfares — carry important symbolic value.  We want to ensure that these symbols align with our mission — namely, that we are a diverse, inclusive scholarly community.”

Thus the 13th President of the United States and one of the founders of the University of Buffalo, Millard Fillmore will no longer have his name associated with the University.  The other two names that are banished from school property are James O. Putnam and Peter B. Porter.

“As we consider some of these symbols, we have no intention of erasing our history. However, we can purposefully determine whom we want to honor in this way,” President Tripathi stated.

Mr. Fillmore is often looked upon by historians as one of our countries most nondescript  Presidents.  For example, President Harry S. Truman said of  Fillmore that he was “as a weak, trivial thumb-twaddler who would do nothing to offend anyone.”

However the 13th president did leave his mark on Buffalo.  Mr. Fillmore played important roles in helping to start such institutions from the University of Buffalo to Buffalo General Medical Center.

Critics are citing both Fillmore’s signing of the Compromise of 1850 which included the  Fugitive Slave Act and his leadership role in the anti-immigrant, anti-Catholic Know Nothing Party.  The Fugitive Slave Act required fugitive slaves to be returned to their owners even if they had managed to make their way to a free state.

The university has decided to honor Mary Talbert, who founded the Niagara Movement, a precursor to the National Association for the Advancement of Colored People.