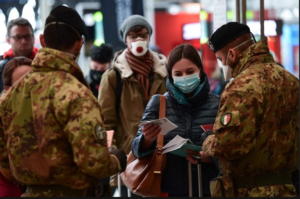 “We are at war with a virus — and not winning it,” declared U.N. Secretary-General Antonio Guterres to the  world’s 20 major industrialized nations during an emergency virtual summit.  According to a running count by Johns Hopkins University, the number of people infected in the U.S. topped 82,000 on Thursday. That’s just ahead of the 81,000 cases in China and 80,000 in Italy.  Italy has the most confirmed deaths of any country with more than 8,000. More than 1,000 people have died in the U.S.

Over one-quarter of the world’s population are experiencing their borders  being sealed, businesses being curtailed and home isolation being enforced or strongly encouraged.

That comes as U.S. deaths from the pandemic have now topped 1,100, in another grim milestone for a global outbreak that is taking lives and wreaked havoc on economies and established routines of life. Worldwide, the death toll climbed past 23,000, according to Johns Hopkins’ running count.

Nearly 3.3 million Americans applied for unemployment benefits last week — almost five times the previous record set in 1982 — amid a widespread shutdown caused by the virus. The surge in weekly applications is a stunning reflection of the damage the viral outbreak is inflicting on the economy. Layoffs are sure to accelerate as the U.S. economy sinks into a recession with revenue collapsing at restaurants, hotels, movie theaters, gyms and airlines.

Meanwhile, the human and economic toll of the lockdowns against the coronavirus mounted Thursday as India struggled to feed the multitudes, Italy shut down most of its industry, and a record-shattering 3.3 million Americans applied for unemployment benefits in a single week.

In New York, where more than half of the U.S. cases have been reported, exhausted hospital workers are turning to increasingly desperate measures to combat the virus.

Louisiana was quickly becoming another smoldering hotspot. The number of new cases there jumped by more than 500 Thursday, for a total of over 2,300, with 86 deaths, including a 17-year-old, the health department said. The higher infection numbers reflected an increase in testing. New Orleans was gearing up for a possible overflow at hospitals, with plans to treat as many as 3,000 patients at the city’s convention center.

Companies in Europe are laying off workers at the fastest pace since 2009, according to surveys of business managers. And the U.S. is bleeding jobs as well: The number of Americans applying for unemployment benefits last week was nearly five times the old record, set in 1982.

Italy, the eurozone’s third-biggest economy and a major exporter of machinery, textiles and other goods, became perhaps the first Western developed nation to idle most of its industry, extending a shutdown on smaller, nonessential businesses to heavy manufacturers.

Elsewhere around the world, South Africa, with the most industrialized economy in Africa, headed into a three-week lockdown starting Friday. The country is already in recession, with an unemployment rate of 29%.

And Britain unveiled another relief effort, this time aimed at the gig economy, many of whose workers are facing financial ruin. The government will give the self-employed grants equal to 80% of their average monthly profits, up to 2,500 pounds ($2,975) per month.

China said it is temporarily barring most foreigners from entering as it tries to curb imported cases. Reports of new infections from inside the country have stopped.

In the Mideast, Saudi Arabia announced a total lockdown on the capital, Riyadh, and Islam’s two holiest cities, Mecca and Medina, in addition to a nationwide curfew. In the United Arab Emirates, authorities announced an overnight weekend lockdown and used drones to tell people to stay home.

In Brazil, the country’s governors are defying President Jair Bolsonaro over his call to reopen schools and businesses, dismissing his argument that the “cure” of widespread shutdowns is worse than the disease. As of Thursday, the country had more than 2,500 cases and 59 deaths.