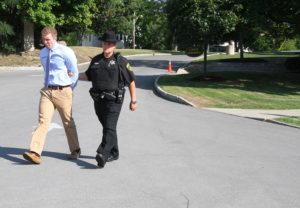 LIVINGSTON COUNTY – The courtroom saga is not over yet for Colin Dahlberg, who was convicted Friday morning of misdemeanor charges for wrongfully driving an ambulance drunk from an emergency call on campus to the post office in Geneseo.

Dahlberg, 22, will sit in jail for a week while his attorney, Peter Skivington, presents more information to Judge Robert Wiggins as he considers an appropriate sentence. Judge Wiggins said while ordering Dahlberg held in jail that he may be being unduly lenient by allowing Dahlberg to remain out of custody after being convicted and granting furloughs for him to take online exams.

“You’re going to jail today. We’ll see you Friday at 9 a.m., and bail is revoked,” said Judge Wiggins to Dahlberg. “Part of me thinks that we’re being unduly lenient on someone just convicted of five serious crimes.”

Judge Wiggins said that the maximum possible sentence in this case is one year at the Livingston County Jail. Both District Attorney Greg McCaffrey and Skivington put their thoughts regarding Dahlberg being held in jail on the record.

“Given the court’s verdict, five misdemeanors which I consider to be serious charges, we are asking that he be remanded without bail at this time,” said McCaffrey.

“Throughout the course of this case, my client has not had the right to any plea besides the top count. I believe the charges as filed were unjustified, but he has never taken the position that he didn’t do what was alleged and is taking full responsibility for his actions,” said Skivington.”I ask that he be allowed to remain free on bail for several reasons. First, he has an online class that has an exam Monday. He will have to have access to a personal computer and the internet. Second, he is expected to go on a family vacation that has been planned for quite some time. I understand the seriousness of his convictions, but have no question that he will return to court on Friday.”

McCaffrey said that he will be asking Judge Wiggins to sentence Dahlberg to serve jail time. Skivington indicated that he will ask for weekends with work release eligibility.

“If we adjourn sentencing and the court considers a period of straight-time incarceration, I am concerned that he [Dahlberg] be allowed to start school and continue school. Straight time would certainly interfere with his last year of college.”

“As I indicated, I am not going to make any commitments to what happens when we come back here next Friday,” said Judge Wiggins. 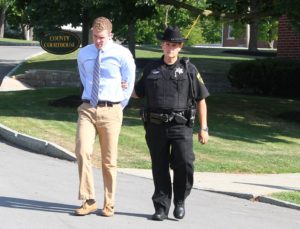