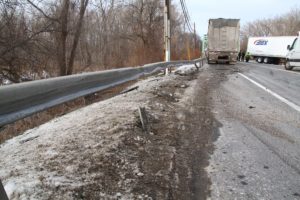 GENESEO – A truck struck the side of a sedan Tuesday afternoon at the intersection of Rte. 63 and Court Street.

Livingston County Sheriff Thomas Dougherty confirmed that the occupant of the sedan sustained serious physical injuries in the accident, which occurred after 2:30 p.m.

First responders did not extract the occupant of the sedan from the vehicle.

Rte. 63 is closed at Court Street.

The Livingston County Sheriff’s Office is investigating the collision using multiple investigators and an aerial drone. Large skidmarks and vehicle debris is scattered in the northbound lane of Rte. 63 from the area of the intersection with Court nearly to the bridge toward Piffard. Rte. 63’s northbound guiderail is badly damaged.

Firefighters with Geneseo Fire and Ambulance responded to the scene alongside ambulance crews with Livingston County EMS. The Geneseo Police Department and SUNY Geneseo Police assisted with traffic control.

The GeneseeSun.com is witholding photos of the sedan pending law enforcement notification of the occupant’s family.