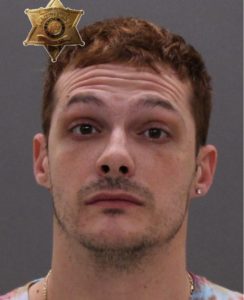 On February 10th, 2021 Deputy Gordon Truax was assigned to the Sheriff’s Office Operation Safe Interstate initiative when he stopped a vehicle on Interstate 390 for a violation of the NYS Vehicle and Traffic Law.  The operator of the vehicle was identified as Matthew M. Stepien, age 30 from Olean, NY. During the stop Stepien was suspected to be involved in drug activity which prompted a roadside drug investigation.  The roadside investigation revealed that Stepien was in possession of approximately four (4) ounces of suspected marihuana, which later tested positive for THC. Stepien was also found to be in possession of a hypodermic instrument, as well as a collapsible baton.

A records check revealed that Stepien did have a suspended NYS driver’s license.

Stepien was turned over to Central Booking Deputies at the Livingston County Jail for processing and released on appearance tickets to return to the Geneseo Town Court at a later date, as the offenses did not qualify for arraignment under the NYS Justice Reform Act.