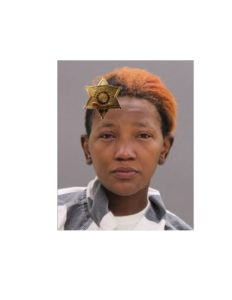 On May 6th, 2022 at approximately 8:31pm, Sheriff’s Deputies responded to the area of Interstate 390, in the Town of  Avon, for the civilian report of a vehicle that was all over the road while traveling in the northbound lanes. Sheriff’s Investigator Connor Sanford did locate the reported vehicle and conducted a traffic stop after observing a violation of  the NYS Vehicle and Traffic Law. Deputy Justin Hilt, who was assigned to the Sheriff’s Office STOP DWI Unit, also  responded to scene of the traffic stop to assist.

The operator of the vehicle was identified as Kionna M. Speed, age 33 from Clarion, PA. During the encounter, the  Sheriff’s Deputies suspected that Speed was under the influence of alcohol. A DWI investigation was launched, which  included the performance of standardized field sobriety tests. At the conclusion of the roadside investigation, Speed was  taken into custody for DWI.

During the investigation, it was also discovered that Speed did have a passenger in the vehicle that was under the age of  sixteen (16) years old. Speed was also found to be operating with a suspended NY Driver’s License.

Speed was arrested and charged with felony Aggravated Driving While Intoxicated (Leandra’s Law), Endangering the  Welfare of a Child, Aggravated Unlicensed Operation in the Third Degree, as well as additional Violations of the NYS  Vehicle and Traffic Law.

Speed was transported and turned over to Central Booking Deputies at the Livingston County Jail for processing and pre arraignment detention. The offenses did qualify for arraignment as the Judge can invoke driving restrictions however,  the Judge cannot set bail under the NYS Justice Reform Act.