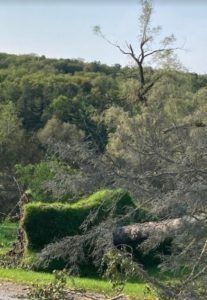 Officials from the National Weather Service (NWS) have confirmed a tornado touched down near the town of Springwater yesterday at 12:57 a.m.

The severe weather event began near the town lines of Conesus and Springwater, traveling east-southeast from there with consistent tree damage through the hamlet of Websters Crossing. Damage began to the west of Route 15 and continued across the intersection of Main Street and Route 15, then through a swamp and a second wooded area crossing Marrowback Road. The tornado knocked down or uprooted several softwood and hardwood trees and caused some minor structural damage to a storage shed and pool, but officials report no injuries from the storm, said Livingston County Deputy Administrator William Mann.

“This tornado touched down right behind a row of houses and came out of the woodline within throwing distance of several homes,” said Mann. “Considering this storm’s path, we’re just amazed and grateful there were no injuries reported and no structures were seriously impacted. Thankfully, most of the damage was done in wooded areas away from homes.”

Weather events like this are rare for Livingston County, according to Mann. NWS estimates the tornado achieved maximum wind speeds of 110 mph, making it an EF-1 tornado on the Enhanced Fujita Scale, which uses estimated wind speeds and related damage to assign ratings to each tornado.