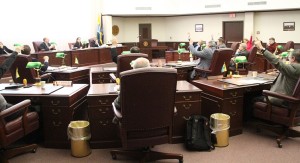 The Town Supervisors make their opposition to minimum wage increases by show of hands on Feb. 24, 2016. (Photo/Conrad Baker)

LIVINGSTON COUNTY – Some of the highest ranking elected officials in Livingston County are taking firm stances on statewide minimum wage increases that are planned to go into effect in the next few years.

Though some supervisors have openly backed $15 minimum wage, the overwhelming majority supervisors have vehemently spoken out against it at Board meetings and Committee meetings. All five Supervisors serving on the county Ways and Means Committee said at their meeting on Monday that they are in favor of a formal resolution that would inform Albany that the Livingston County Board of Supervisors officially stands against $15 an hour minimum wage.

“Straight-up, this is an opposition to a $15 minimum wage,” said County Administrator Ian Coyle. “There have been some folks backing it. [Supervisor David Levey] in West Sparta received some balanced commentary, and [Supervisor Deborah Babbitt-Henry] in Springwater sent an email in support of $15 an hour minimum wage.”

Eric Gott, Ways and Means Committee member, Livonia Town Supervisor and Chair of the Board of Supervisors, said that Babbitt-Henry’s email is welcome and appreciated.

“It was a good email,” said Gott. “It explained her position and why she is in in favor, and that’s the kind of dialogue we want.”

Gott went on to say that a $15 minimum wage would hurt the Arc of Livingston Wyoming.

“Just moving Arc employees to $10.75 an hour cost the Arc over a million dollars in the first year,” said Gott. “Here we were thinking about how this will hurt small businesses and farmers and we didn’t even think about the Arc.”

Geneseo Town Supervisor William Wadsworth said that part of the reason he is opposed to the statewide minimum wage increase is that the job market in Livingston County is very different from Long Island or New York city.

“A big part of the pro argument says that people are not qualified for new careers and new jobs being created,” said Wadsworth, “but as a rural area we don’t have a lot of new jobs.”

Gott said that if this resolution in opposition to $15 minimum wage passes, he encourages all members of the Committee to personally reach out to legislators in Albany opposing it as well.

“If this passes, I would urge everyone to reach out personally to our elected officials,” said Gott. “It is my understanding that the deals are already being made with downstaters.”

The resolution in opposition to $15 minimum wage unanimously passed the Ways and Means Committee and will now go to the Board of Supervisors for final review and consideration.