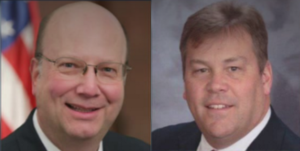 LIVINGSTON COUNTY – The passing of Bill Nojay, incumbent in the 133rd Assembly District, has raised questions about Tuesday’s primary election.

According to our news partners News10NBC, Nojay’s name will still be on the ballot alongside his opponent, Rick Milne.

If Milne wins, he would become the next Republican candidate for Assemblyman. But if Nojay wins, the Republican Committee chairs for Livingston, Monroe and Steuben County would together appoint one candidate.

In the days following Nojay’s passing, Milne suspended all political activity. He has since resumed campaigning, emphasizing that the election still counts.