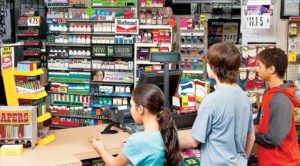 LIVINGSTON COUNTY – A new statewide campaign is seeking a reduction in tobacco advertising for Livingston County, specifically in advertising that could affect children.

The #SeenEnoughTobacco campaign by Tobacco-Free GLOW (in Genesee, Livingston, Ontario, and Wyoming Counties) funded by the New York State Department of Health, Bureau of Tobacco Control launched on May 31, World No Tobacco Day, citing a statement by the U.S. Surgeon General calling smoking a ‘pediatric epidemic’ and saying that, ‘advertising and promotional activities by tobacco companies have been shown to cause the onset and continuation of smoking among adolescents and young adults.’

“Our goals for Livingston County are to get the word out and educate the community, and we’d like to see more municipalities make decisions about what they can do policy wise,” said Keenan. “Villages and Towns can adopt a licensing ordinance, only allowing a certain number of tobacco sale licenses, or the County Board of Supervisors can consider a blanket ordinance. We’re not gong to tell municipalities ‘this is what you need to do,’ but we do give them some options.”

The campaign uses video, social media, digital advertising and a children’s book, Jack and Jill (and Tobacco), that follows two children’s encounter with tobacco marketing in a convenience store. Images combine cigarettes with common children’s items, like crayons and birthday cake, to grab the attention of community members and parents.

Keenan gave a presentation to the Association of Livingston County Boards in November 2015. The Village of Avon has invited him to present again at one of their board meetings.

“Smoking among youth is going down, it’s about 11 to 13 percent, but e-cigarette use is going up,” said Keenan. “The data is kind of slim on e-cigarette use, but the New York State Department of Health and Roswell Park have done some research. One of the key factors in kids trying e-cigarettes is that kids and parents don’t know how they effect the body. The FDA two weeks ago said that they will control the manufacture of e-cigarettes, but not marketing. And that’s a huge problem because it’s being marketed as better.”

An online petition for #SeenEnoughTobacco is available here. Keenan says that the signatures will eventually be presented to the state legislature to drive tobacco marketing restrictions like display restrictions and license ordinances.

“Retail marketing is the last frontier for tobacco industry,” said Keenan. “I grew up with the tobacco marketing, on magazines and billboards. I remember Joe Camel. All of that was geared towards desensitizing youth to the product. Adults already know what they want, if they’re a smoker going into a store. They don’t need to see ads.”