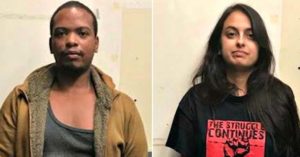 In separate incidents a pair of Brooklyn lawyers and a woman were indicted yesterday, June 11th,  on federal explosives and arson charges for allegedly tossing Molotov cocktails at NYPD vehicles.

The woman, Samantha Shader, 27, of Catskill, is accused of hurling the makeshift explosive at an NYPD vehicle on May 30th.  Four policemen were in the car.

Meanwhile in a separate incident, two lawyers residing in Brooklyn allegedly threw their own Molotov cocktail at an unoccupied police vehicle.  The accused are Urooj Rahman, 31, and Colinford Mattis, 32.

Besides tossing the incendiary device  Shader is also accused of biting  one of the officer’s legs when she was being taken into custody.

Fortunately, no officers were injured.