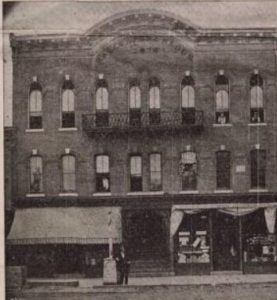 The Town of Avon is seeking the help of the community to help find old photographs of Avon’s famous Opera Block. The Town of Avon recently received a grant to restore the top floor of the Avon Opera Block and the Town would like to bring as much accuracy to the restoration project as possible.

This historical commercial building was built on Genesee Street in Avon in 1876. The building was originally called Clark’s Opera House, named after the owners of the building E. H. Clark & Son, who were dealers in hardware.  The building was built after a fire had destroyed the entire Town block in 1874, which was home to the grand United States Hotel, the Avon post office, a clothing store, shoe store and grocery store.  After the new building was built, the top floor of the Opera Block became a central gathering place for the Avon community and beyond.

With its open floor plan and large stage, the Opera House became an ideal spot for community events such as concerts, dances, theatrical performances, political meetings, rolling skating events and graduation ceremonies.  The Opera House is also noted for hosting performances from such famous acts such as, the San Francisco Minstrel and General Tom Thumb and his wife. There is even some thought that Elizabeth Cady Stanton and Sojourner Truth may have also lectured there.  Traces of signatures from many who performed on the top floor of the Opera House can still be seen today on the backstage walls, doors, and dressing room areas.

If you have any memories of the Clark’s Opera House/Avon Opera Block that you would like to share or copies of photos that could be scanned, please contact the Avon Town Historian at (585) 226-2425 ext. 6 or historian@avon-ny.org. You may also contact the Avon Preservation and Historical Society at avonpreservation@gmail.com or stop into the museum, open every Sunday from 1-4pm located at 23 Genesee Street, Avon NY 14414.