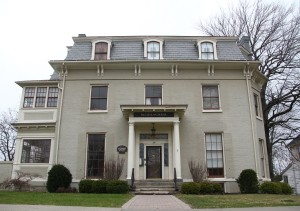 The McClellan House, which houses the Lockhart Gallery. (Photo/Sarah Simon)

GENESEO – SUNY Geneseo will be presenting the landscape-inspired works by artist Cicely Cottingham, whose visualization of time and mood floats with the clouds and sky, and flows with the changes of the seasons.

According to a press release from Gallery Director Cynthia Hawkins, Cottingham’s exhibit, ‘Everything Is Sky,’ will open at the Lockhart Gallery on Wednesday, March 30 with reception from 5 to 7 p.m. Cottingham will speak about her work at 5:30 p.m.

Throughout her experimentation as a visual artist, Cottingham has received numerous awards including the Joan Mitchell Foundation in Painting and Sculptors Grant, the Pollock/Krasner Grant, and the New Jersey State Council on the Arts Fellowship Awards. Institutions that retain her work in permanent collections include The Noyes Museum of Art, The Newark Museum, the Jersey City Museum, and Jane Voorhees Zimmerli Art Museum at Rutgers University.

The sites of Cottingham’s previous exhibitions dot the east coast, and include the Hunterdon Museum of Art, Aljira, a Center for Contemporary Art, and La Mama’s La Galleria in downtown Manhattan. Still, Cottingham has inspired Geneseo before. A drawing invitational, Drawn to New York, premiered at The Bertha V.B. Lederer Gallery on campus in 2010.

According to her website, Cottingham is forever flexing her artistic intellect while encouraging others to exercise theirs; she has a worked with the nonprofit visual arts organization Aljira, which aims to serve emerging and underrepresented artists, since 1984.

Cottingham currently lives and works in New Jersey, where she spent her childhood. After graduating in 1966 with a BFA degree from Pratt Institute in Brooklyn,  she spent time traveling around the Atlantic coast only to recognize her childhood setting as a primary creative influence. Her more recent work implements the color and shape of urban environments as an exercise in abstraction, “yet the landscape of her youth is never entirely out of the picture.”

Her work has been written about in the New York Times, New Art Examiner, Review, and Artnet Magazine.

‘Everything Is Sky’ will run from March 30 to April 30 at the Lockhart Gallery within the McClellan House at 26 Main Street. The gallery is open for viewing from 1 p.m. to 4 p.m. on Wednesdays and Thursdays, and from on Fridays and Saturdays 1 p.m. to 5 p.m.