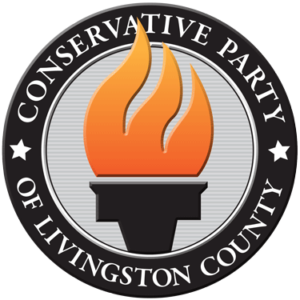 From a humble beginning garnering 141,000 votes on ballot Row F, our principles have attracted Empire State voters in sufficient numbers
to raise the Party to Row C and twice received over a million votes for our candidate in a statewide election. From the founding of the party, it has been successively chaired by Kieran O’Doherty, J. Daniel Mahoney, Serphin R. Maltese, Michael R. Long and Gerard Kassar. Through the leadership of these men and the hard work of committee members, the Conservative Party elected James L. Buckley to the U. S. Senate, William Carney to the House of Representatives, Serphin R. Maltese to the State Senate, Rosemary R. Gunning, Charles Jerabek and Angela M. Wozniak to the State Assembly. History was made in New York City with the 2001 election of then Conservative Party Executive Vice Chairman James P. Molinaro as the Borough President of Staten Island and his reelections in 2005 and 2009.