According to a press release from Geneseo Police Chief Eric Osganian, an 18-year-old male is charged with felony Grand Larceny in the Third Degree, felony Identity Theft and felony Criminal Possession of Stolen Property in the Fourth Degree. Holly Chapman, 25, was arrested for misdemeanor Making a False Written Statement.

The GeneseeSun.com is withholding his name and photo because he may be treated as a youthful offender in court and have his arrest record sealed.

In September, the male is thought to have made a false deposit at an ATM in the Village and used Chapman’s credit card, with her permission. He allegedly withdrew ‘several hundred’ dollars. Officers charged him with felony grand larceny alleging fraudulent use of an ATM.

Officers further allege that Chapman originally claimed to have no knowledge that her card had been used in the incident.

A Geneseo Village Justice arraigned the teen and remanded him to the Livingston County Jail on $500 cash or $1,000 bond.

Chapman was arrested Nov. 8 while the investigation was ongoing. She was released to appear in court at a later date. 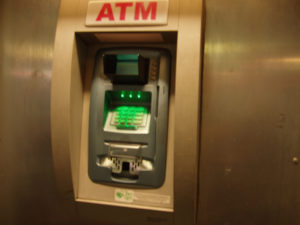 An ATM. Not the ATM alleged to have been used in the incident.(Photo/Nicolas Vigier via Flickr.com)